The Bold and the Beautiful Spoilers: Week of June 11 – Sally Pulls a Gun on Wyatt – Xander Crushes on Emma – Thorne Gets Katie 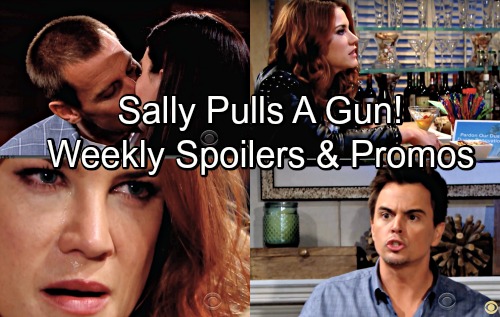 The Bold and the Beautiful (B&B) spoilers for the week of June 11-15 tease that we’ll see plenty of shockers. First, Wyatt (Darin Brooks) will get a big surprise at The Bikini Bar. He’ll be there to drown his sorrows after a tough chat with Katie (Heather Tom). They’ll realize they want different things, so it looks like a split’s on the way.

That should lead Wyatt to the watering hole. He’ll know a breakup is for the best, but he’ll still want to numb his pain. The Bold and the Beautiful spoilers say Wyatt will see another tortured soul nearby. He’ll almost do a double take as he spots Sally (Courtney Hope) knocking back a few.

Sally will clearly be in a funk. She’ll seem jaded and angry as she stares straight ahead. You can bet Thomas (Pierson Fode) will be a factor in both Sally’s bad mood and her return to Los Angeles. Naturally, Wyatt will be a bit confused. He’ll wonder why Sally suddenly decided to come back to LA.

Thomas and Sally’s B&B reunion obviously ran into trouble. Perhaps he went back to Caroline (Linsey Godfrey) and broke Sally’s heart. Whatever the case, Sally will be single and focused on vengeance. She’ll make another perplexing move when she follows Wyatt home and pulls a gun on him.

There’s a chance this is a fantasy, but it’s also possible Sally will target Wyatt in revenge plot. She may think it’s a good tactic to hurt Bill (Don Diamont). Of course, Wyatt may suggest that won’t work. Bill hates Wyatt’s guts now, so he would tell Sally to fire away. Fortunately, Wyatt should settle Sally and quickly begin to connect with her.

Other Bold and the Beautiful spoilers say Thorne (Ingo Rademacher) will make his move with Katie (Heather Tom). He’ll share his feelings for her and lean in for a steamy kiss. A new love story will kick off for Emma (Nia Sioux) as well. Maya’s (Karla Mosley) cousin, Xander (Adain Bradley), will feel an instant spark with the lovely Forrester intern.

It sounds like some fun stuff’s coming up. We’ll give you updates as other B&B news emerges. Stay tuned to the CBS soap and don’t forget to check CDL often for the latest Bold and the Beautiful spoilers, updates and news.