The Bold and the Beautiful Spoilers: Week of March 26 – Bill Faces Brooke’s Wrath Over Ridge Being Thrown in Jail

BY Heather Hughes on March 23, 2018 | Comments: one comment
Related : Soap Opera, Spoiler, Television, The Bold and the Beautiful 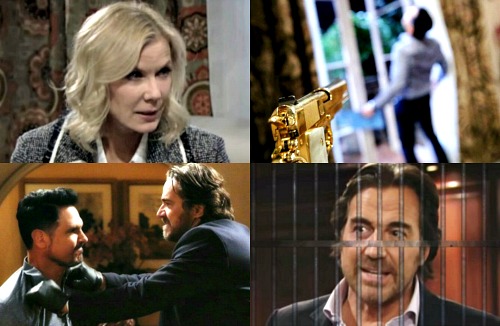 The Bold and the Beautiful (B&B) spoilers tease that Bill (Don Diamont) face the wrath of a bitter ex. He accused Ridge (Thorsten Kaye) of shooting him in the back, but we all know this mystery won’t be that easy to solve. B&B fans watched the attempted murder play out and it’s clear that Bill couldn’t have seen who did this. He’s simply letting his rage toward Ridge get in the way of true justice.

Brooke (Katherine Kelly Lang) will suspect that Bill’s lying or at least mistaken about that night. The Bold and the Beautiful spoilers say Brooke will confront Bill about his claims in the week ahead, March 26-30. She’ll defend Ridge and insist that there has to be another explanation.

When Bill stands by the info he gave to the cops, Brooke will hit the roof. Ridge may have betrayed Brooke in the past, but she trusts him far more than Bill at the moment. Over the past few months, Bill has given everyone in town a reason to hate him. He’s told plenty of lies and put many shady schemes in motion.

B&B viewers can expect Brooke to call Bill out on all that. She’ll wonder how anybody’s supposed to take his word for this. The Bold and the Beautiful spoilers say some old issues will resurface for these exes. They’ll have a nasty argument, so viewers will want to pass the popcorn and settle in for some exciting scenes.

Brooke will feel like Bill’s always the source of conflict and chaos. She’ll rip into him for putting Ridge in this situation before vowing to make it right. Brooke won’t let the wrong individual be convicted. She’ll recruit plenty of help to make sure Ridge walks free.

Liam (Scott Clifton) will continue to doubt Bill’s version of events as well. He could play a big role in uncovering the truth. It sounds like this Bold and the Beautiful storyline is heating up, so stay tuned for all the hot drama. We’ll give you updates as other B&B news comes in. Stick with the CBS soap and don’t forget to check CDL often for the latest Bold and the Beautiful spoilers, updates and news.