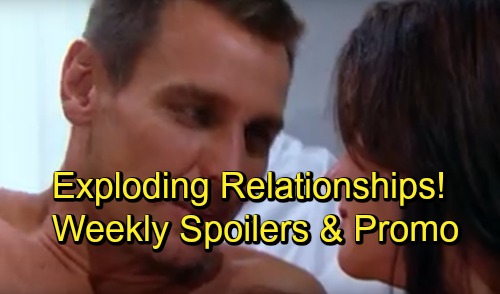 The Bold and the Beautiful (B&B) spoilers and promo video for the week of October 8-12 tease that we’ll see some emotional moments and some daring moves. First, Bill (Don Diamont) will stop by to see Will (Finnegan George) and Katie (Heather Tom). He may not have custody rights anymore, but that doesn’t mean he’ll let Will feel abandoned. Instead, Bill will promise he’s going to be the very best dad possible.

Meanwhile, Brooke (Katherine Kelly Lang) will do something a bit sneaky. She’ll put a plot in motion to extract a confession from Judge McMullen (Joe Lando). The Bold and the Beautiful spoilers say Brooke’s plan will likely pay off. Later, she’ll have a heated confrontation with her manipulative husband. Brooke won’t be happy about Ridge (Thorsten Kaye) pressuring the judge for a favor.

Of course, Ridge will defend his actions. He’ll admit that he influenced the custody case, but he won’t apologize for it. Ridge will argue that Bill needed to suffer for his mistakes. Besides, Ridge feels like Katie deserved sole custody. As far as he’s concerned, Thorne (Ingo Rademacher) should be the only father figure in Will’s life.

Other Bold and the Beautiful spoilers say Steffy (Jacqueline MacInnes Wood) and Wyatt (Darin Brooks) will bond. They might reflect on the good times before moving forward with some even better ones. Steffy will let Wyatt know she needs him on her team. She’ll offer him a job, but Quinn’s (Rena Sofer) reaction will catch him off guard.

It sounds like Wyatt and Quinn will end up clashing just a bit. For whatever reason, Quinn may not be too happy about this arrangement. Back with Steffy, she’ll witness something shocking. B&B fans can expect Bill and Brooke to share a close moment in the week ahead. They just won’t be able to resist a steamy kiss and that’s when Steffy will make her discovery.

Steffy won’t be sure what she should do with this info. After mulling it over briefly, she’ll decide that Ridge deserves the truth. The Bold and the Beautiful spoilers say Steffy will explain what she saw and give Ridge the chance to confront Brooke. He’ll do just that, so be prepared for a fierce fight!

It looks like the week of October 8-12 will be crammed full of hot drama. We’ll give you updates as other B&B news comes in. Stay tuned to the CBS soap and don’t forget to check CDL often for the latest Bold and the Beautiful spoilers, updates, and news.