BY Heather Hughes on September 20, 2018 | Comments: one comment
Related : Soap Opera, Spoiler, Television, The Bold and the Beautiful 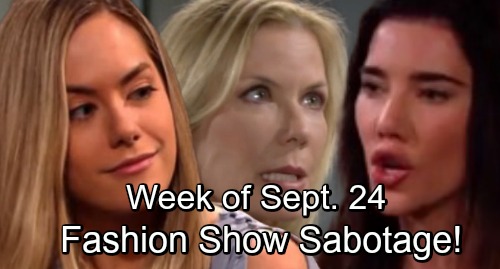 The Bold and the Beautiful (B&B) spoilers tease that Steffy will continue to give Hope (Annika Noelle) an attitude and focus on herself. After everything Steffy’s been through, she feels like she’s entitled to be selfish when it comes to her line. Besides, Steffy wants to make the intimates collection a hit. Whenever she pours salt in Hope’s wound, she can justify it as doing what’s best for the company.

However, Steffy’s really leading with her heart and not her head here. She’s still in pain over losing Liam (Scott Clifton), so she’s making moves that help her get revenge. That obviously seems like a recipe for disaster. B&B fans know how things usually work out for vengeful characters. They may get the retribution they’re seeking, but it tends to come at a steep price.

Steffy’s just a bit too smug at the moment. The Bold and the Beautiful may be setting her up for a major fall. After all, Hope can’t be on the losing end of this battle forever. Sooner or later, there has to be some sort of shift.

Steffy’s sinking everything she’s got into this line, which has been successful thus far. The preparations are moving along smoothly, which is exactly why we should be suspicious of what’s in store. The Bold and the Beautiful spoilers hint that we could see the first sign of trouble on next week’s new B&B episodes, September 24-28. It turns out adding Xander (Adain Bradley) as a model could begin the destruction.

Zoe (Kiara Barnes) will try to use this as a chance to grow closer to her ex. That’ll naturally drive Emma (Nia Sioux) up the wall. It won’t be long until the tension’s exploding and this love triangle’s spiraling out of control. Brooke (Katherine Kelly Lang) will sense that Steffy doesn’t have a grip on the situation. She’ll decide to make some daring moves and fix the drama on her own if she can.

Of course, Brooke’s involvement raises a few eyebrows. She only cares about Hope and her happiness. Brooke probably wouldn’t mind watching Steffy crash and burn, so her efforts to “help” may not exactly turn out that way. The Bold and the Beautiful spoilers also say there could be some fashion show sabotage down the road. No matter who’s to blame, Brooke might face startling accusations.

Bottom line, Steffy can’t stay on top of the world indefinitely. Her success could ultimately turn into a horrible defeat! We’ll give you updates as other B&B news comes in. Stick with the CBS soap and don’t forget to check CDL often for the latest Bold and the Beautiful spoilers, updates and news.