The Bold and the Beautiful Spoilers: Wyatt and Katie Choose The Dark Side – Form Unholy Alliance With Busted Bill

BY Marcy Cohen on May 12, 2018 | Comments: one comment
Related : Soap Opera, Spoiler, Television, The Bold and the Beautiful 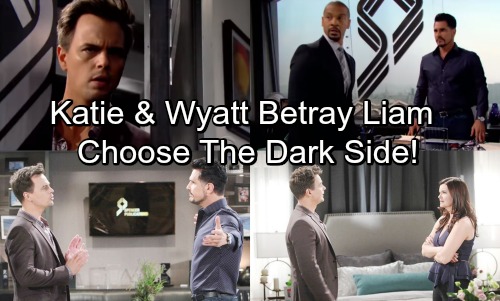 The Bold and the Beautiful (B&B) spoilers tease that Bill’s (Don Diamont) plan is on the verge of falling apart. Ridge’s (Thorsten Kaye) suspicions will continue to rev up, so be prepared for plenty of explosive confrontations on this weeks new B&B episodes, May 14-18. Steffy’s (Jacqueline MacInnes Wood) suffering and that’s something Ridge won’t stand for. He’ll do whatever he can to expose Bill’s deception and fix Steffy’s marriage.

Of course, Ridge isn’t the only threat to Bill’s happiness. Wyatt (Darin Brooks) served as an unwitting pawn in his father’s scheme and he’ll realize it soon enough. Next week, Wyatt will confront Bill about using him to destroy Liam (Scott Clifton) and Steffy’s relationship. He’ll put everything together and rip into his devious dad. 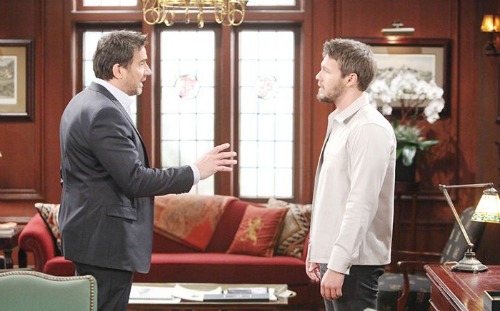 Bill will undoubtedly deny it at first, but The Bold and the Beautiful spoilers say Wyatt will push for an admission after he overhears Justin. At some point, Bill should confess that he did what he had to do. He’ll reiterate his “righting a wrong” nonsense and act like he’s doing Liam a big favor. Bill will argue that everyone needs to be thanking him for his brilliant plot.

Naturally, Wyatt won’t see it that way. He’ll be furious that Bill came between Steffy and Liam again. The fact that Wyatt was inadvertently part of it will really send him over the edge. Bill will have to get a grip on Wyatt somehow. He won’t want his son to go around blabbing what he knows. 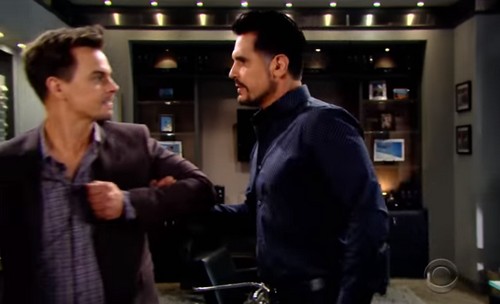 Bill might blackmail Wyatt by bringing up the Will (Zane Achor) custody issue again. He could also vow to cut Wyatt out of the company. Bill’s certainly made that threat before. If Wyatt still presents a problem, Bill could try rewarding him for his silence instead.

Perhaps Bill would be willing to allow Wyatt and Katie’s (Heather Tom) marriage after all. He might suggest that they can have the wedding of their dreams as long as Wyatt keeps his mouth shut. Would Wyatt go for that or sacrifice his own future for Liam and Steffy’s sake? It could be a tough call, but B&B fans hope Wyatt would do the right thing. Unfortunately, Katie will use the opportunity to gain leverage over Bill and convince Wyatt to maintain the lie and choose the dark side.