The Bold and the Beautiful Spoilers: Wyatt and Katie’s Summer of Destruction – Romantic Woes Bring Heartache and Fresh Love Interests

BY Heather Hughes on June 1, 2018 | Comments: one comment
Related : Soap Opera, Spoiler, Television, The Bold and the Beautiful 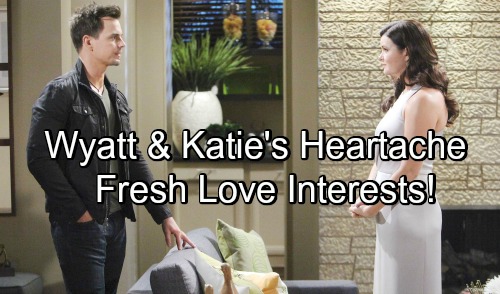 The Bold and the Beautiful (B&B) spoilers tease that Wyatt (Darin Brooks) and Katie (Heather Tom) will face some surprising obstacles. Now that Bill’s (Don Diamont) cut Wyatt off completely, you’d think that’d offer “Watie” some freedom. They should really revisit the marriage idea since Wyatt and Bill are done with each other.

Bill could still go after custody of Will (Zane Achor), but that could be harder thanks to the latest incident with Steffy (Jacqueline MacInnes Wood). He put his unborn granddaughter’s life at stake by pestering her pregnant mom. Katie could use that to her advantage if Bill tries to take her to court. Liam (Scott Clifton) and Steffy would happily do their part to help out.

There could soon be nothing standing in the way of Wyatt and Katie’s wedding. However, that doesn’t mean their nuptials will happen. In fact, B&B fans will probably see a shocking split. The Bold and the Beautiful spoilers say Katie and Wyatt will have to take a long, hard look at their relationship. They’re about to deal with some doubts and revelations they didn’t see coming.

Katie and Wyatt certainly feel a strong spark. They’ve spent most of their time in bed together since they started this romance. However, sex isn’t everything. They have to think about the future and what they want out of it. As Wyatt watches Liam and Steffy with their new baby, it’ll undoubtedly make him think about his own plans for kids. Wyatt won’t be sure he’s ready for them just yet.

Of course, that could lead to some issues. Katie may not even want more children and if she does, waiting could prove problematic. Her biological clock is ticking, so that’s something they’ll have to mull over. Furthermore, Wyatt won’t be sure he’s prepared to be a stepfather to his little half-brother.

That brings us to another complication. Katie and Wyatt’s relationship isn’t exactly incestuous, but it’s right on the border. They can’t deny that it’s a weird area to get into. Thorne (Ingo Rademacher) will also be waiting to pounce. He’ll keep flirting and seeking his shot with Katie, so the deck is really stacked against “Watie.” It sounds like Katie and Wyatt will ultimately throw in the towel.

That’ll push Thorne and Katie together, but what about poor Wyatt? Hope’s (Annika Noelle) about to be single and Sally’s (Courtney Hope) coming back, too. Wyatt will have some options, so there’s no need to fret! We’ll give you updates as other Bold and the Beautiful news comes in. Stick with B&B and don’t forget to check CDL often for the latest Bold and the Beautiful spoilers, updates, and news.