The Bold and the Beautiful Spoilers: Wyatt Explodes Over Bill’s Manipulation – Learns He Was a Pawn in ‘Steam’ Breakup Plan

BY Marcy Cohen on May 7, 2018 | Comments: one comment
Related : Soap Opera, Spoiler, Television, The Bold and the Beautiful 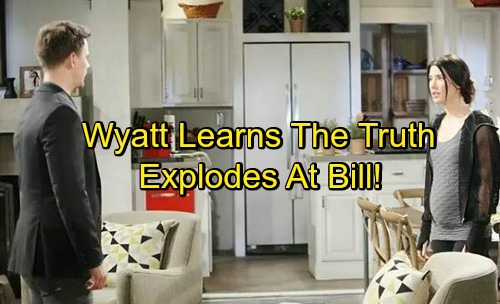 The Bold and the Beautiful (B&B) spoilers tease that Wyatt (Darin Brooks) will struggle with some confusion. He’s convinced that Steffy’s (Jacqueline MacInnes Wood) been cheating behind Liam’s (Scott Clifton) back, but she’ll promise she’s done with Bill (Don Diamont). For Steffy, this was never anything more than a simple hookup. Bill’s the one who turned it into some epic love story.

Wyatt will be puzzled when Steffy continues to deny all involvement. He won’t get why she’s so determined to fight for Liam. The Bold and the Beautiful spoilers say Steffy will make her spiel and try to convince Wyatt that she belongs with his brother. She’ll hope he can understand that and help Liam see the light, too.

Wyatt may have to mull it over, especially since Hope (Annika Noelle) and Liam will already be so happy. However, something could click as the wheels turn for Wyatt. He’ll eventually decide he needs to have another chat with Bill. B&B fans can expect Wyatt to demand the truth from his father. He’ll want to know if Bill’s truly involved with Steffy or if this was all some plot.

The Bold and the Beautiful spoilers say Wyatt will finally crack the case. During the week of May 14-18, Wyatt will discover that he was lied to. He’ll be outraged when he realizes Bill used him as a pawn in his evil plan. Wyatt will feel guilty for buying it and setting so much drama in motion. He might tell Bill that this has to stop.

Liam and Steffy deserve to know the truth, but Bill won’t want to give it to them. How will he handle Wyatt’s threat? Bill might prey on Wyatt’s emotions and point out that he could break Hope’s heart. Since Bill will have confidence in his plans, he’ll just think Wyatt should butt out and finish what he started. Bill may contend that Wyatt shouldn’t rock Liam’s happiness boat again.

If that doesn’t work, Bill could revisit his vow to sue Katie (Heather Tom) for custody of Will (Zane Achor). He must know Wyatt would still care. Plus, Bill could also go back on his word about handing over the company. Everything could be on the line if Wyatt comes clean to Liam and Steffy!

It sounds like Wyatt will be in a real bind. We’ll give you updates as other B&B news comes in. Stay tuned to the CBS soap and don’t forget to check CDL often for the latest Bold and the Beautiful spoilers, updates, and news.