The Bold and the Beautiful Spoilers: Wyatt Warns Liam to Delay Wedding to Hope – Liam’s Making a Big Mistake

BY Heather Hughes on August 10, 2018 | Comments: one comment
Related : Soap Opera, Spoiler, Television, The Bold and the Beautiful 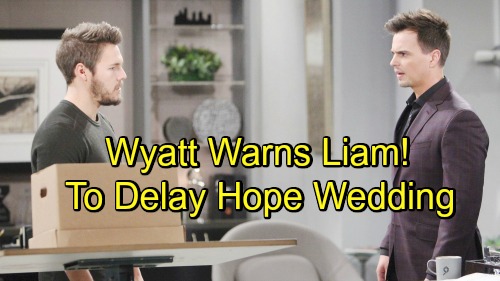 The Bold and the Beautiful (B&B) spoilers tease that Wyatt (Darin Brooks) will have a few worries. When Liam (Scott Clifton) updates his brother on the latest Hope (Annika Noelle) details, Wyatt will advise him to be cautious. He’ll hear all about the rushed wedding and argue that maybe this isn’t such a good idea.

Liam won’t see any reason to wait, but Wyatt will think he actually has every reason to. B&B fans know Liam’s love life has been a huge mess for months. He walked away from Steffy, but eventually decided to take her back.

Then, Bill’s (Don Diamont) manipulation pushed Liam toward Hope. The truth derailed their wedding, so Liam reunited with Steffy only to pull back again thanks to Hope’s pregnancy.

Now Steffy’s made the decision for him, so Liam’s back with Hope once more. It’s enough to make anyone’s head spin! Liam’s bounced around like a ping-pong ball for far too long. How can he even know what’s in his heart right now? Wyatt will suggest that Liam needs time to truly think about this. He has to consider his own feelings as well as Hope and Steffy’s.

Wyatt may contend that deep down, Steffy probably doesn’t want to watch Liam move on yet. He may think Liam’s not ready for that anyway. If Liam marries Hope and ultimately realizes he made a mistake, that’s just going to break her heart, too. Everyone’s got a lot invested here, so it’d be best for Liam to take a breather and enjoy a lengthy engagement.

However, that’s just not how Liam rolls. The Bold and the Beautiful spoilers say Liam will stand his ground and move forward with the “Lope” nuptials. He’ll appreciate Wyatt’s guidance and concern, but he’ll believe he’s making the right call. Since Steffy’s done with him, Liam remain all in on a future with Hope.

You can bet Liam will wish he’d listened later! The Bold and the Beautiful spoilers say Liam and Hope’s marriage is most likely doomed. What will finally tear these two apart? Will Liam end up back with Steffy?

We’ll keep you posted as other B&B news comes in. Stay tuned to the CBS soap and don’t forget to check CDL often for the latest Bold and the Beautiful spoilers, updates, and news.