The Bold and the Beautiful Spoilers: Zoe Steals The Show From Insecure Emma

BY hellodrdavis on July 16, 2018 | Comments: one comment
Related : Soap Opera, Spoiler, Television, The Bold and the Beautiful 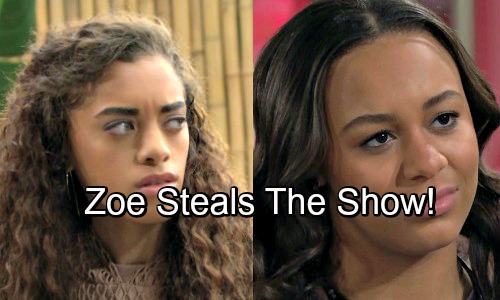 The Bold and the Beautiful spoilers tease that Emma (Nia Sioux) is in for a big surprise. She’s psyched that Hope (Annika Noelle) has included her dance routine as part of the upcoming Hope For The Future fashion show at Forrester.

Emma’s been choreographing the routine and wants it to be just right for the show. But little does she know that Zoe (Kiara Barnes) is working behind the scenes to undermine her. Zoe “accidentally” bumped into Emma and now the two are friendly acquaintances.

But Zoe’s got an agenda. Zoe is Xander’s (Adain Bradley) ex, and she’s quite jealous of the little romance that Xander and Emma have going on. She’s even made threats against Emma on the Hope For The Future website, threats that were mistaken as those against Hope.

It looks like Zoe’s going to get even bolder in her quest to go after Emma and ultimately re-connect with Xander. B&B spoilers say that Emma will become insecure after witnessing Zoe take away her spotlight, and that the Hope For The Future fashion show will end with an unexpected showstopper.

Will Zoe be the unexpected showstopper? Zoe may find out about Emma’s big dance routine and decide to one-up her with a grand appearance at the end of the show! B&B spoilers say that Zoe will go incognito and sneak into Forrester, so it’s certainly possible that she’ll stage a surprise grand finale to the show with herself at the star!

Of course, if Zoe goes this route, then she’ll be outing herself to Xander, but at this point she may not care. She may figure that it’s time to make herself known to Xander, before he gets any closer to Emma. Zoe wants nothing more than to get her hands on her ex once again.

Do you think Zoe is going to insert herself into the Hope For The Future fashion show? Stay tuned to the CBS soap and don’t forget to check CDL often for the latest Bold and the Beautiful spoilers, updates, and news.