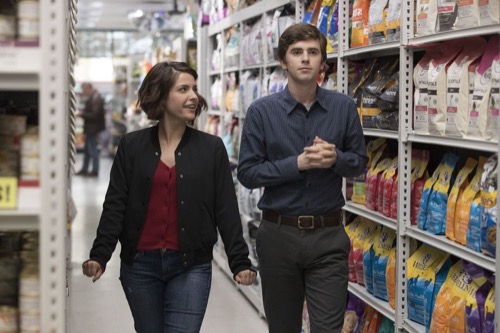 Tonight on NBC their new medical drama “The Good Doctor” airs with an all-new Monday, November 12, 2018, episode and we have your The Good Doctor recap below.  On tonight’s The Good Doctor season 2 episode 7 called, “Hubert,” as per the ABC synopsis, “Dr. Shaun Murphy and Dr. Morgan Reznick must contend with two brothers who are bargaining over life and death. Meanwhile, Dr. Claire Brown’s friend who is dying of cancer asks her for something she doesn’t think she can give her; and Dr. Aaron Glassman is dealing with the effects of his treatment.”

Lea and Shaun are looking to acquire a new pet, he finds out that she is allergic to cats. In the end, they get a goldfish and she calls him Hubert.

Claire goes to visit her friend Kayla, she is not doing well and says that her team put her on hospice.

Dr. Browne speaks to Dr.Melendez and Dr. Park about her college roommates’ stage four cancer. She tells them that she has a month at most. Dr. Browne wants them to remove the tumor to stop the pain. Dr, Melendez says he look at her.

A man comes into emergency with a nail in his forehead, it is removed but then he passes out, his brother is wondering what is wrong.

Dr. Melendez meets with Claire’s friend and tells her that Dr. Park will perform the surgery, she wants Dr. Browne, Dr. Melendez promises she will be there.

The brother is in surgery and he has a damaged kidney that has to be removed, the problem is, he was only born with one kidney.

In surgery, Kayla’s cancer doesn’t seem as bad as she was diagnosed and she may be eligible for treatment. The surgery is done, Dr. Melendez explains the surgery to Kayla, this could give her another six months even though it is a risky surgery. Claire tells her friend that it is worth putting her trust in the doctors, she says ok.

Lea face times Shaun and tells him that Hubert looks bored. She asks him to bring he a little castle to make him happy.

Claire is alone with her friend and she asks her to go out with her husband Tash so he is not alone when she is gone.

Dr. Park and Dr. Browne are alone doing a scan on Kayla when he smiles and looks over and says, Tash seems like a nice man.

The two brothers talk about the one needing a kidney and the other is a perfect match, but won’t give up his kidney unless he agrees to sell the family business.

Claire speaks to Tash about Kayla, he asks her if Kay mentioned them getting together when she is done. Claire says it is insane, Tash says it is best to forget about it.

Dr, Reznick is not happy that the brother is using the sale of the family business as leverage for a kidney for his brother; he is basically bargaining over life and death.

Kayla asks Claire if she has considered hooking up with her husband Tash. Claire says it will never be the right time, she has no intentions of dating her husband. She pressures Claire to accepting one date,one date only and seeing where things go.

Dr. Reznick speaks to the brother who could donate his kidney and tells him that he should love his brother enough to give him the kidney. He says everything in life is leverage, he has leverage over his brother. Dr. Reznick says that she doesn’t think he will let his brother die, he says he will.

At dinner, Claire and Tash are doing their best to enjoy themselves to make Kayla happy. They start talking about the past and both start laughing and enjoying the conversation.

Dr. Murphy goes to see Santiago, the brother who needs the kidney and tells him that he should sell the business and take the money to start a new business and have his brother as a partner. He says his father trusted him with controlling shares and he would rather die than sell them. The thing is, he only has a couple of days.

Shaun gets home and finds Hubert dead, he tells Lea they can get another fish. Lea says no, she is sad, angry, frustrated and upset. Shaun wants to get another fish, she says the fish is not the problem. Lea tells him that she is upset about her relationship with her brother and if she can’t keep a fish alive, how can she work on a relationship.

Kayla says goodbye to Tash, she is going into surgery. Claire is there, Kayla reminds her that she has to try and make it work with Tash if she doesn’t make it through surgery. Claire calls her a neurotic control freak that always wants to get her way.

Santiago’s brother is at the hospital, other family members are testing themselves to give him a kidney. Dr. Murphy tells him that his brother would rather die than let his father down. The brothers try to make up, but it turns out to be a disaster and they start to argue, Santiago screams at his brother to get out of his room.

In the end, the brother signs the consent form to give his brother the kidney.

Tash is waiting for Kayla to come out, Claire comes out and tells him that she is doing well. Tash and Claire sit down and talk, he tells her about her fatigue and pain, he just wants to help her, he hates waiting for her to die. Claire has to return to the OR, Tash is a mess. In the OR, Kayla is in cardiac pulmonary collapse.

The brothers are out of surgery, Santiago is improving, he thanks his brother for the kidney.

Kayla is out of surgery and talking to Tash, Claire walks in and says sorry for the words she said before she went into surgery. Claire tells her to start thinking about herself, she is dying, it is not fair, it is painful and scary – but she is not alone.

Claire thanks Dr. Melendez for everything he did, she tells him that he is the most gifted surgeon that she has ever worked with.

Shaun takes Lea to the pet store, he tells the clerk that the fish had a parasite and they owe him a fish. They get to pick a fish. Lea didn’t kill Hubert, he was defective.