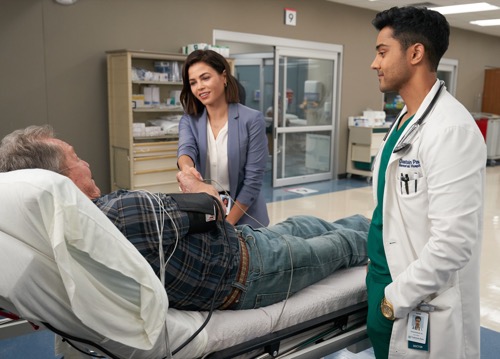 Tonight on FOX their new medical drama The Resident airs with an all-new Monday, October 08, 2018, episode and we have your The Resident recap below.  On tonight’s The Resident season 2 episode 3, “Three Words,”  as per the FOX synopsis, “Nic and Conrad contemplate their past when they team up to diagnose a happy husband and wife who are both admitted to the hospital with mysterious symptoms.

Bell and Marshall butt heads on a work trip when their cut-throat business tactics don’t align. Meanwhile, AJ turns down a request from Bell despite Mina’s forewarning, Devon continues to gravitate to medical device rep Julian and the staff gears up for Conrad’s three-year anniversary at Chastain.”

The Resident season 2 episode 2 airs at 9 PM – 10 PM ET on FOX. Make sure to bookmark this spot and come back for our The Resident recap! While you wait for the recap make sure to check out all our television recaps, news, spoilers & more!

Conrad and Irving are playing pool. Nic comes to see them. They don’t know each other, but she gives them a hard time for dominating the table. If she makes the shot she can have the table, Conrad tells her. She gets it in.

Irving and Conrad are at Chastain. They have an emergency and need saline but there is only one bag left. They fight for it. Conrad heads to see Bell. He is sick of it. Bell dismisses him. He has things to do.

Conrad is called to meet a young woman and her husband. They requested him because he has five stars whereas Irving has 4 stars. Her husband insists it is Conrad. They are scared she may be rejecting the liver she just received from her hubby.

Bell talks to the board about the saline shortage and suggests they make their own. Marshall tables it which makes Bell angry. Bell calls for a vote and wins. After the meeting, they discuss the upcoming meeting they have.

Devon meets with a patient in the ER who insists he is being struck by lightning. He has a pacemaker and a defibrillator. Devon tries to explain to him that it is the device shocking him.

Bell speaks to AJ, he isn’t making his quota when it comes to robotic surgeries. If he doesn’t work on it, he will be replaced.

Conrad performs an ultrasound on the young woman who just recently received a new liver. Her heart rate plummets. She has fluid built up around the heart. Nic comes in to assist him as he begins to drain the fluid. Nic recalls the first time he did the same procedure as an intern. He told her to get out of the way or help him. She helped him. He was impressed she went rogue.

Marshall and Bell are on Marshall’s jet. Bell tells him he will find the CEO’s to head up their possible saline company.

Mina tries to show AJ how to use the robotics for surgery. He laughs at her and explains that Chastain calls him the raptor. He builds one out of Legos in minutes and leaves the room. Mina smiles.

The husband of the woman who recently received a liver drops to the ground after wheezing. They admit him. Nic talks to his wife who tells her they just honeymooned in the big islands. Nic thinks back to a time when Conrad came to her house to make her feel better when she wasn’t feeling well. She miscarried and didn’t know she was pregnant. He tells her this wasn’t her fault. When she asks what he would have wanted to do if he had known she was pregnant he doesn’t respond.

Devon calls in the young female Pharma rep he met the week before to help him with the man who has a defibrillator.

Nic and Conrad have the couple in the same room. They both have the same infection but the husband has a rash in his groin area. When he tries to discuss it, he begins to lose his breath and his heart rate plummets while the wife asks him if he cheated on her during their honeymoon.

Marshall meets Bell’s three CEO candidates and calls them all out for their lies and unsuccessful business behaviors. He has done his research and none of them are fit for the job. Bell is embarrassed. Marshall tells Bell to let him deal with the business of business.

Nic and Conrad talk about the couple and if the husband cheated. She has doubts he has changed. It has Conrad asking her if she is talking about them. She tells Conrad that they had problems before. Why are they together now?

Bell gives a great speech at the convention that has the audience excited. Meanwhile, AJ tells Conrad his patient has severe lung issues and his organs are shutting down.

Devon has an emergency with his patient whose device has completely failed. AJ shows up to help. He guides Devon through the procedure. It was a success and now the man needs surgery to replace the device.

Nic and Conrad talk to the wife who tells them about how they both suffered food poisoning recently and how when her husband cooks with oil it smokes them out in the apartment and makes him cough a lot. Nic and Conrad go to their house to take a look. At their home, Conrad tells Nic how the husband’s STD test came back negative. Conrad points out that maybe he has changed. He and Nic recall an incident at a tavern they were at when Conrad became violent after some guy grabbed Nic. Nic was upset and broke up with himself because of his explosive and unpredictable attitude. He tells her he has changed since then. And she needs to believe that so they can move on.

Nic realizes there is a lot of pottery in the house. They look in the cellar. They make their own. That is what has caused their lung issues.

AJ and Mina head to surgery. Bell warns him that he needs to use robotics. AJ tells him no and if he doesn’t like it, fire him. Bell makes an empty threat and walks away. Mina tells AJ if he was going to be fired it would have happened right then.

Marshall and Conrad share a moment about how they have both changed. Meanwhile, Devon gets some dance tips from the Pharma rep. They slow dance. Mina sees them from outside. Meanwhile, the husband and wife reassure each other that neither one of them is going anywhere.

Nic and Conrad meet at the tavern. He is surprised she showed up. She tells him she loves him and thinks it will be different this time.