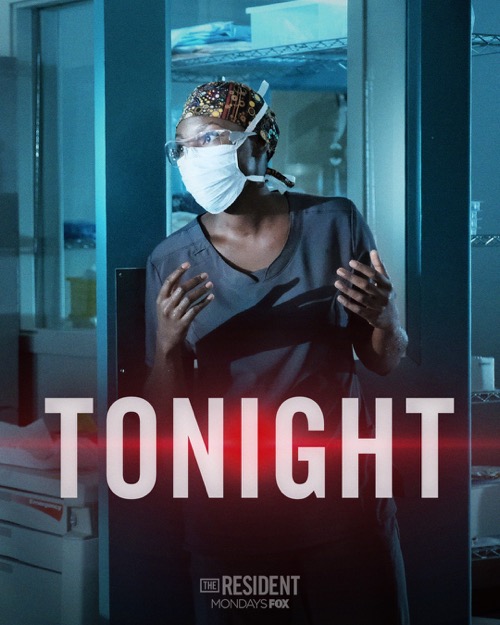 Tonight on FOX their new medical drama The Resident airs with an all-new Monday, February 26, 2018, episode and we have your The Resident recap below.  On tonight’s The Resident season 1 episode 5, “None The Wiser,”  as per the FOX synopsis, “Three concurrent surgeries at the hospital push its staff to the limits. Determined to ease the pressure, Nic requests Jude for one of the operations, making Conrad jealous. Meanwhile, Dr. Lane Hunter sets out to discredit Nic’s claims, Devon struggles with a patient who has an embarrassing problem and a charitable contributor comes to the hospital wanting to donate a lot of money to Dr. Lane’s oncology program.”

The Resident season 1 episode 5 airs at 9 PM – 10 PM ET on FOX. Make sure to bookmark this spot and come back for our The Resident recap! While you wait for the recap make sure to check out all our television recaps, news, spoilers & more!

Randolph is walking to meet his other colleagues to talk about his failed surgery with Mina in a morbidity conference. He is dizzy along the way. He makes it in and sits. He is asked to explain how these errors happened.

12 Hours Earlier – Devon is in with a couple. The husband thinks he has cancer. Conrad comes in to tell him he doesn’t have cancer, but an atrophy testicle.

A teenage son has forced his mother to come into the hospital. The mother wants to leave. Nic ensures her that everything will be all right. She will get her the best doctors.

Mina is sewing at home. Her beeper goes off. Devon, Irving, and Conrad meet with a patient who has inserted an object into his rectum and it isn’t the first time. Conrad is familiar with the man named York. This time it is a syrup bottle.

Devon, Irving, and Conrad see Mina in the break room. They all laugh about York.

Conrad examines the mother. She has high blood pressure and her feet are cold. Conrad orders some scans.

Nic pulls Conrad into an empty room. She shows him pics from Lane’s clinic. She is giving patients extremely high dosages.

Devon shows the couple an assortment of testicle implants. They laugh as they look them over.

Conrad and Nic inform the mother she has an aortic aneurysm. She needs surgery. She starts to become hysterical. Nic takes her son for a walk.

Devon works to remove the syrup bottle from York, but he doesn’t manage to get the crown out.

Nic is talking with one of the surgeons who just finished a 30-hour shift. Randolph asks him to stay and scrub in. Nic objects, but the surgeon agrees to stay.

Nic pulls Jude aside to ask him to scrub in for a surgery. Conrad comes by. He disagrees with Nic, but she and Jude are on the same side. Conrad gets upset and walks away.

Nic is outside on break. Conrad sits with her, apologizing for his attitude. They get to talking about his family. She doesn’t know much about him. He doesn’t want to get into it. He doesn’t need her help.

Nic visits with Lilly, who doesn’t feel good. Nic asks her if she plans on getting a second opinion. Lilly shares that she only trusts Dr. Lane.

Randolph asks Nic why Jude has taken over the surgery for the mother whose son brought her in. Jude is very familiar with the procedure, she tells him. He wants to know what is going on with York and he wants Devon to catch him up. When Devon brings Randolph into the room, York makes it sound like Devon failed to do his job because he didn’t remove the crown from the syrup bottle.

Nic comforts the teenage boy whose mother is headed into surgery.

Lane takes Nic off of her patient Lilly. She threatens her, telling her she won’t be a nurse if she comes near her patients and snoops around her clinic anymore.

Randolph and Devon scrub in to watch Bradley operate on York. Just as they begin, Bradley passes out. Randolph yells for Mina. She helps for a minute until she is called back to her OR. At the same time, Jude has scrubbed in to do his own surgery while Nic helps walk the mother with an aneurysm into OR3 after it burst. Mina works between rooms, trying to assist Randolph. They end up botching the surgery of the patient who was in their for a simple procedure, having his testicle replaced. Instead, he was left with none.

Randolph takes responsibility in the meeting. He apologizes to the patient.

Jude meets with Nic and apologizes for his part in the failed afternoon of surgeries. They leave the hospital together. Just as Nic climbs into the passenger side of Jude’s car, Conrad spots her. But he is approached in the dark by a man who was at the hospital earlier, talking to Lane. It is his father.