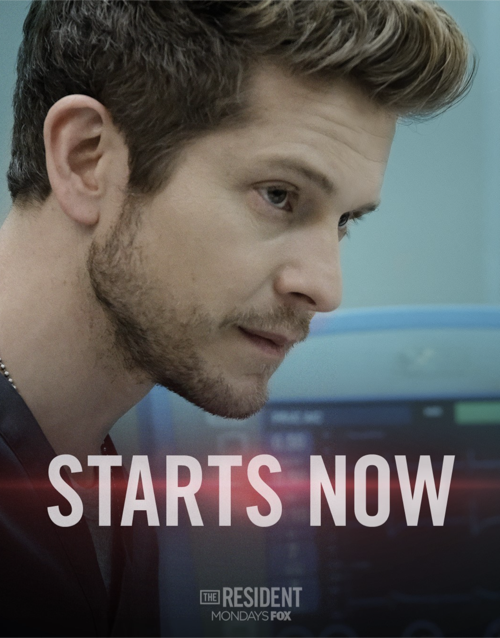 Tonight on FOX their new medical drama The Resident airs with an all-new Monday, May 7, 2018, episode and we have your The Resident recap below.  On tonight’s The Resident season 1 episode 13, “Run, Doctor, Run,”  as per the FOX synopsis, “Devon and Conrad race against the clock to save the life of a woman who is deteriorating fast from undetermined symptoms. When the patient turns out to be a hero who helps previous criminals get their lives back together, the team relies on her family of ex-cons to help diagnose and treat her.”

The Resident season 1 episode 13 airs at 9 PM – 10 PM ET on FOX. Make sure to bookmark this spot and come back for our The Resident recap! While you wait for the recap make sure to check out all our television recaps, news, spoilers & more!

Conrad chases down the street after a guy who has been following Nic. He misses him but gets his license plate. Meanwhile, Devon’s patient is hallucinating. He chases her through the hospital. She gets scared and runs out of the ER doors and gets hit by an ambulance.

The woman, Claudia, is rushed into surgery. AJ is performing with Mina. Bell comes in to visit. AJ hands him the scalpel. Bell sweats through some of the procedures before finishing a suture and handing the scalpel back to AJ. Claudia comes out of surgery with her trauma fixed but is still having head issues.

In the lobby, a former gang member and ex-con named Felix comes in screaming for Claudia. Conrad has to calm him down.

The ER’s frequent patient York has arrived. Conrad tells Devon to take care of him. Last time York was in he had inserted a condiment bottle in his rectum. This time he is with his mother. He makes Devon swear to take care of her.

Nic finds a woman that works at the clinic with Lane. She refuses to help Nic gets some of Lilly’s blood records. Nic heads back home. Her front door is open. She comes in slow, looks around and finds her sister on the floor. She tells Nic she screwed up. Nic discovers she has taken oxy. She calls 911 and gives her Narcan.

Nic comes into the ER with her sister by ambulance. Lane comes by to see her and offer her sister help. Nic tells her to go. She doesn’t want her help.

Claudia is brought in for a CT and begins to seize. They cannot figure out what is wrong with her.

Devon and AJ inform York and his mother that she needs heart valve replacement. York doesn’t take it well.

Claudia comes back negative for bacterial meningitis. Conrad tells Devon to go and talk to Felix and get as much as possible on Claudia.

AJ and Mina tell York and his mother she is going to have the surgery awake since she does not do well in anesthesia. She tells York to leave the room and tells AJ and Mina she has Chlamydia.

Devon finds out from Felix and some other visiting ex-cons who Claudia has helped that they were recently at a lazy river.

Bell comes to see Mina. He is not happy that they want to do York’s mother’s surgery with her wide awake. He wants Mina to change that. She meets with AJ so they can try a run with her as the patient. He laughs at her.

Devon and Conrad discover Claudia has a brain-eating amoeba. Conrad wants to freeze her to kill the amoeba.

Nic gets a call from the girl from the clinic. She wants to help. She couldn’t live with herself if she didn’t help. She asks Nic to meet her at 4 am.

In surgery, AJ is having trouble concentrating because York’s mother won’t stop talking.

Devon and Irving hunt down a drug to try and save her. She is uninsured and the meds are $48k. Devon tells Felix and the others. They are going to find a way to get it while the drug supplier drives four hours to bring the dose needed.

Nic comes to see Irving who is sitting with the ex-cons and Felix while they raise money for Claudia. A large man named Mambo sees Nic and remembers she helped his uncle. He tells her he owes her. She tells him she does, in fact, need help with something. Mambo brings groceries to the man who has been harassing Nic.

The drug supplier brings the medicine for Claudia. Felix has the money. Meanwhile, York’s mom pulls through surgery successfully.

Nic goes to meet the girl at the clinic. The door is open. She lets herself in. Someone may a mess and ransacked the place. The police pull up. Nic is inside.

Claudia is awake and okay. Devon tells Felix and the others. They are thrilled.

Nic calls Conrad. She is an Atlanta Detention Center. She tells him to go talk her sister. She needs him to bring her to rehab. Jessie puts up a fight but goes.