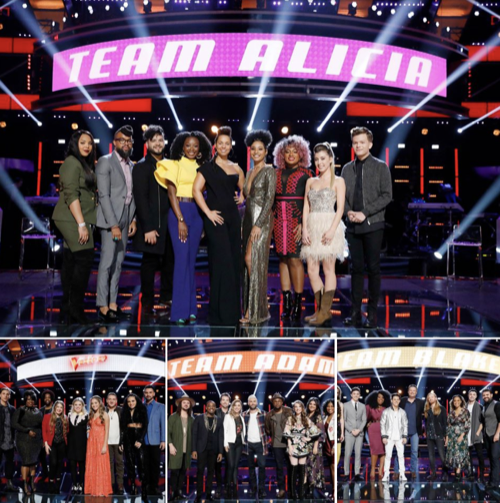 Tonight on NBC’s Emmy Award-winning musical competition The Voice airs with an all-new Monday, April 2, 2018, season 14 episode 12 and we have your The Voice recap right below.  On tonight’s The Voice season 14 episode 12, called, “The Knockouts Premiere” as per the NBC synopsis, “The knockouts get underway. Former “Voice” champions return as advisers, including Cassadee Pope (Team Kelly), Jordan Smith (Team Adam), Chris Blue (Team Alicia), and Chloe Kohanski (Team Blake).”

It’s the first day of knockouts, season 13 winner Chloe Kohanski is there to be Blake’s advisor and he has paired Jaclyn Lovey vs. Kyla Jade because he feels they are both equally powerful. Jacklyn is singing, “Put your records on,” and Kyla is singing, “You don’t own me.”

Adam: “On the history of the Voice, no stranger pairing ever. Jaclyn you have the sweetest, most angelic voice and Kyla comes out and it is equally as incredible. Congratulations to both you guys.”

Kelly: “I love that, I will be singing in my shower tonight, I want to sound like you Kyla. Jacklyn, I can’t sound like that either, your voice is like a secret.”

Alicia: “Jacklyn I loved how you just performed up here, you were so free, I am so proud of you. Kyla, we just all died, you know what I mean.”

Blake: “Jacklyn the song that you choose got me to learn something about you and Kelly said it best that it is almost like your voice is a secret, it’s so good. Kyla you are beginning to own the front of the stage and maybe its because of what this song means to you at this time.” Blake announces that Kyla is the winner of this knockout.

Time for another round of knockouts, season 3 winner Cassidy Pope is there be Kelly’s advisor and she has paired Justin Kilgore vs. Kaleb Lee. Justin is singing, “Shameless,” and Kaleb is singing, “Free.”

Alicia: “Justin, singing Shameless by Billy Joel showed me more to your range and Kaleb you are continuing to show that you are a force to be reckoned with for sure.”

Adam: “You are choosing your own songs so you are kind of putting yourself out there. Justin you had this intensity to what you were doing, I was trying to figure out who you were. With you Kaleb, you are pure country, the real deal.”

Blake: “I want to come to Justin’s defense here because I don’t think that they realize that that was a Garth Brooks version of that song and Garth’s version is kind of intense but at the same time I feel like you were lost somewhere in between the Billy Joel version and the Garth Brooks version. I honestly think nerves got to you. Kaleb, my regrets is that I let you go this season, I will regret it all season long.”

Kelly: “Justin, the runs you do are so cool and were less nervous this time. Kaleb, I was so impressed before but now I am really impressed and then I look at Blake and think he is so stupid.” Kelly announces that Kaleb is the winner of this knockout.

For his knockout, Adam enlisted his season 9 winner Jordan Smith as advisor and he has paired Jackie Foster vs. Mia Boostrom. Jackie is singing, “Bring me to life,” and Mia is singing, “Wade in the water.”

Blake: “Wow, great job both of you all. Two completely different kind of artists at the top of their game. Jackie, we now know a rock chick can win this show and that has to be something Adam has to take note of, you are as good as it gets, great job. Mia you are the surprise for me, that performance right there was brilliant. I would go with Mia.”

Kelly: “Jackie you have this crazy range. Mia you are a dark horse for me, you opened your mouth on this song and I was in a story. Adam, I don’t think you can go wrong with either one of them but I would pick Jackie.”

Alicia: “Jackie your voice got stronger and stronger, the places you could go with your voice was very very fresh. Mia, that was exciting to hear this beautiful warm passionate voice. I would pick Jackie.”

Adam: “Mia, I said you were going to be the big surprise and you are having that moment right now. Jackie, we have just started working together and that was great. It was truly a tie.”

Adam announces that Mia is the winner of this knockout. Kelly steals Jackie, then Adam saves Jackie, Blake steals Jackie and makes an already difficult decision even tougher. Alicia steals Jackie. It is three steals and a save, never before seen on the Voice. What an incredible moment for Jackie, she has to choose one coach; she chooses Alicia.

Blake’s next knockout pairing is Austin Giorgio vs. Spensha Baker and Chloe is advising. Austin is singing, “Almost like being in love,” and Spensha is singing, “Broken Halos.”

Kelly: “That was so good, that soulful vibe you have Spensha including that country thing is so unique. I cannot wait to buy your album because that kind of country music is what I love. Austin that kind of confidence is so sexy. I think you both are so talented.”

Alicia: “Austin I really appreciate how you use the stage, I love how you even talk to the audience. Spensha I love the way you are so emotional and its telling about how you feel about this moment in your life. I would go with Spensha for this one.”

Adam: “Austin you are so pure and your intention, but there is a bad boy of you that I kind of what I want to see. Spensha there is so much undiscovered in you and with Blake as your coach it is an explosive combination.”

Blake: “We are down to the best of the best and so this is a tough one for me. Austin you clearly have a passion for entertaining. Spensha you clearly have a connection with a song.” Blake announces that Spensha is the winner of this knockout. Blake uses his save on Austin.

Joining Alicia Keys as her knockout advisor is season 12 winner Chris Blue. Alicia is pairing Johnny Bliss vs. Miya Bass. Johnny is singing, “Alive,” and Miya is singing, “Castle on the hill.”

Adam: “Johnny you have such a voice, you are so dynamic and you switched up to Spanish half way through, you’re amazing. Mia, I am always rooting for you but I think the song presented some issues for you, you know i love you.”

Blake: “Johnny, you stayed on point which is impressive especially with that song. I want you to get back to the fun stuff. Mia, I agree with Adam, you did not live up to what you are capable of doing so I have to give this one to Johnny.”

Kelly: “Mia I wish you had gone out there only because your voice has so much potential. Johnny you know I liked you doing something serious, I thought it was pretty cool.”

Alicia: “You are both the most electric energies put on this planet. Mia, your runs are beautiful, you have the church in you and yet with this song it put you in another space. Johnny you poured everything into this. You both did an amazing job.” Alicia announces that Johnny is the winner of this knockout.

Blake: “I feel like this is pretty evenly matched. Drew you have things with your style that would make me think that Adam is leaning more towards you but Jackie you are a country artist and Adam has always had some weird fetish to beat me with a country artist.”

Kelly: “Drew I love that song and you have a really cool song. Jackie you have this angelic quality but you have a big voice. You both did a really good job.”

Alicia: “Drew your voice is really special and there are a lot of similarities between you and Adam actually. Jackie you have this pure tone and at the end you were really powerful, it was really cool.”

Adam: “I love you both, there is no right choice.” Adam announces that the winner is Jackie. Adam saves Drew, Blake steals Drew. It will be up to Drew to choose which coach he wants, Drew chooses Adam.