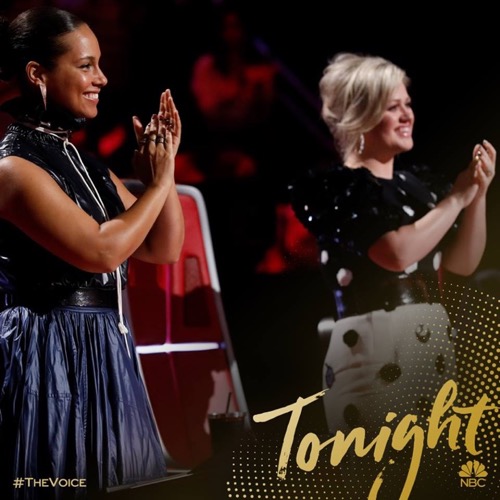 Tonight on NBC’s Emmy Award-winning musical competition The Voice airs with an all-new Monday, May 1, 2018, season 14 episode 22 and we have your The Voice recap right below.  On tonight’s The Voice season 14 episode 22, called, “Live Top 11 Eliminations,” as per the NBC synopsis, “A contestant is eliminated.”

Tonight we find out who our top ten are. and we start with some results. First Carson asks Kaleb how Kelly’s coaching changed him as an artist. Kaleb says that he is a quiet guy, Kelly is an awesome person and makes him feel good by being vibrant and full of energy. A question for Rayshun, what does he want to say to anyone going through a hard time. Rayshun says be positive, love yourself and know great things are going to happen.

Carson asks Jackie Foster, what is the most valuable lesson she has learned from her coach. Jackie says Alicia has been monumental in her journey and thanks her. Carson asks Brynn Carelli how are the friendships formed on the show, she says they are one big happy family and have an amazing bond.

Adam Levine joins his team for the first time this season; Jackie, Rayshun, and Sharane singing, “The Scientist.”

Carson asks Spensha how she is taking country music fans embracing her. Spensha says it means everything to her, she is grateful and honored to tell the stories and appreciates that people are listening with their hearts. Carson then asks Christiana what does it mean to showcase her uniqueness every week, she says that before the show she never showed her creations and is at a loss for words on how grateful she is.

Alicia joins her team; Britton, Christiana, and Jackie on stage for the first time this season singing, “Give Me Shelter,”

Snapchat users have been watching and voting all season and the winner, beating out thousands of people is Nick Roach from Team Adam.

Carson asks Sharane what does her family support mean to her in this process, she says it means everything, her twin sister being able to watch this with her is amazing. Carson asks Kyla what singing last night meant to her, she says that she loves that she was able to give back.

Now the final two have to fight for their lives. From Team Adam Sharane Callister is up first and she is singing, “If I Were A Boy.” Next from Team Alicia is Christiana Danielle singing, “A Thousand Years.”

Results: America has decided to save from Team Alicia, Christiana Danielle.

The artist going home is from Team Adam, Sharane Callister.