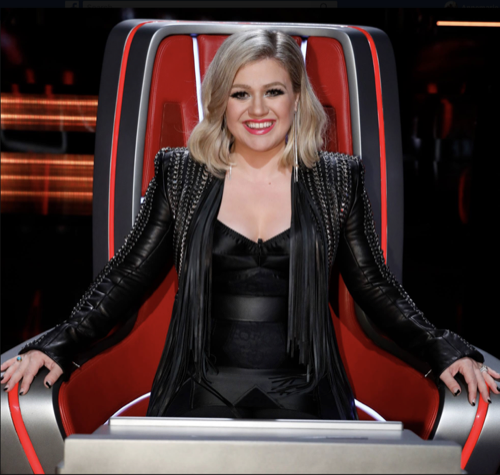 Tonight’s all-new episode of “The Voice” would determine who went on to the semi-finals for the Final Ten.

The Final Ten had all worked pretty hard to get here and in a better world, they would all be given the albums they very much deserved, however, this was competition. There would only be one person crowned at the end as “the Voice” and so everyone had to keep their eye on the prize. This week the contestants got to make their own song selection and they each chose a song they best believed fit them. The first person up tonight was Team Blake’s Kyla. Kyle had a powerful voice and could hit those high notes better than most, so Blake asked her what she chose and why. He wanted to know why her song was so important and there turned out to be a very good reason for why Kyla chose “This Is Me”.

“This Is Me” was from the soundtrack for “The Greatest Showman” and Kyla chose the song because there had been plenty of times when people have made her feel small. She had seen things on Twitter and Instagram that said she was so ugly that no one would want to see her in concert and so that had surprised Blake. Blake had asked Kyla to stop reading those things because he knew how amazing she was and he hadn’t wanted any doubts to get in her head. Except Kyla wasn’t going to let things like that bother her. She explained how growing up she hadn’t felt pretty and had had plenty of people telling her that she would never make something of herself. Kyla was able to withstand all of that because she learned to love herself and so “This Is Me” was her celebration.

Kyla went up onstage tonight and had put her own spin on an Academy worthy performance. She had gotten choked up a little here and there and it just made her performance that much better. Blake had once said that the audience would see her vulnerable and they had. In fact, everyone stood up for her giving her a standing ovation because they had all loved Kyla. Kyla was amazing and Alicia Keys for one had asked her never to forget that. Now everyone wasn’t going to be able to pick a song as meaningful to them as “This Is Me” was to Kyla though that hadn’t meant any of them were even close to being forgettable. The next person that went up had been Team Kelly’s Kaleb. Kaleb picked the song “Boondock”.

Kaleb picked “Boondock” because he said he was actually from one. He had grown up in a place like a song and he had wanted to touch base with his roots, which was why he picked it. Kaleb had wanted to up on that stage and give the audience something lighter from him. He wanted to give them upbeat and had decided to go without his guitar tonight. Kaleb instead started out his performance just sitting down as the song slowly incarcerated in tempo and, when it ultimately got there, he rose from his seat intent on working for the crowd. That hadn’t been like him at all. He normally would stay behind the guitar and so you would think it was Kelly that pushed him to the front only that had been all Kaleb.

Kaleb had wanted to show the audience, the coaches, and his family for one that guy that he was at home. He had his wife and mother brought in during practice because he wanted to get that relaxed feel he only had with them and that had helped him later on when he welcomed people in with tonight’s performance. Kaleb went out and had fun, and people ended up having fun with him as well. His coach had been so proud of him that Kelly couldn’t contain herself. She never hid the fact that he was her favorite and he proved why every week. Kelly had been proud of the performance and all the coaches/judges had been proud of her when it was Kelly’s turn to perform up onstage. She had sung one of her new songs and had once again shown up she won the first season of American Idol.

The next contestant, on the other hand, had shown her newfound range. Team Adam’s Jackie had found her sweet spot on tonight’s all-new episode. She had chosen to sing Raelynn “Love Triangle” and while she had practicing she had found just the right tone that made everything sound sweet. It was almost as if it was a lullaby when in actuality it was about loss. Jackie chose the song because she resonated with the lyrics and had seen it herself with many of her friends, so tonight she wowed the resident country star Blake with the song because he hadn’t truly grasped how talented she was until that very money. That was when he saw this rising country start and Jackie’s own coach had been proud of her as well because he had seen her get better and better with each passing week.

Adam had seen how much Jackie had grown as an artist and he wanted to keep her around because he wanted to see what else she could do, yet out of his remaining artists, no one quite wowed Adam as much as Rayshun. Rayshun had an old-school vibe and so it was Adam that gave him his latest song. Adam heard “Mr. Jukes” by Grant Green and Charles Bradley on the radio and had known right away it was meant for Rayshun. It gave him some of that old-school vibe and had a modern twist to it. So of course, Rayshun went out and had fun with it. He began his performance liked he began all of them – he made it a concert event and had invited the audience to dance along. Rayshun was always great at that. He always left people in a better mood and smiling.

Kelly later said Rayshun was a bright light in an often jaded world and Adam couldn’t agree more. Rayshun’s coach believed Rayshun was making into the semifinals of that performance alone and said America would be cheating itself if that didn’t make that happen. Therefore, Adam wasn’t ready to say goodbye to any of his two contestants. He wasn’t ready and neither was anyone else. It was Team Blake’s turn again following Rayshun’s performance and this time they went back to the country. Blake was very proud of Spensha. She was the new face of country and Blake was glad to see her showing off her softer side. She chose to sing Taylor Swift’s Red”. The song was all about emotion and there was this bittersweet tone to it that Spensha made her own.

Spensha slowed down the song and hadn’t been afraid to hit those high notes. She took a few risks in there and the judges had all lapped it up because they loved Spensha singing that song more than they loved the song in itself. She had made Blake proud of her and even developed a few fans amongst the judges. The judges were all kicking themselves for the artists they let slip through their fingers. They said that of Kyla, Spensha, and later on they said that of Team Alicia’s Jackie. Jackie had realized she was a rocker and she could have stuck with being a rocker, but she hadn’t wanted everyone to believe that was all there was and so she took a risk as well. She chose to sing “Gravity” by Sara Bareilles.

It was a part melody, part pop, and all Jackie. Jackie gave a more vulnerable performance and it made off for her because everyone had loved it. They had all liked what Alicia’s artists tend to bring to the table and Jackie had been the one to start it off. She gave an incredible performance and then Britton went up. He had sung his own rendition of Tina Turner’s “What’s Love Gonna Do With It” and if the judges could steal people everyone would have voted to steal him. He somehow turned a legendary song into something that completely original and so everyone loved Britton. And that wasn’t surprising because there had never been a moment that any of them hadn’t loved Britton. The only thing different about tonight had been the fact that he sang a song by a legendary woman.

Meanwhile, Christiana sang a song by a legendary man. She came to pick the song “Aint No Sunshine” by Bill Withers. She slowed it down some and had put a jazz spin on it, so she made it her own. She also gave a great performance as in she wasn’t afraid of dancing around the stage or playing to the audience. Christiana was an entertainer in that sense and there wasn’t a lot of those this season. Some were ready to just stay in one place while others just had to move. Either way, it was always the voice that mattered and no one had as much of a distinctive voice like Pryor. Pryor went back to his country roots tonight when he chose to sing “My Town” by Montgomery Gentry. His coach said he could make known songs sound new again and that was because of his voice.

Pryor sang the country song like it was a country song, however, he also threw in some of that screaming he’s known for and it worked. What he did worked a lot more than what Brynn did. She decided to sing “Fix You” by Coldplay and it was a slow song very heavy on emotional, so throwing in the “yeah” here and there just didn’t work. It made the emotion in the song sound force and oddly enough she chose it because of how the song in its original format made her feel.

So with the risks, they all took, who would be eliminated tomorrow for what they did tonight?