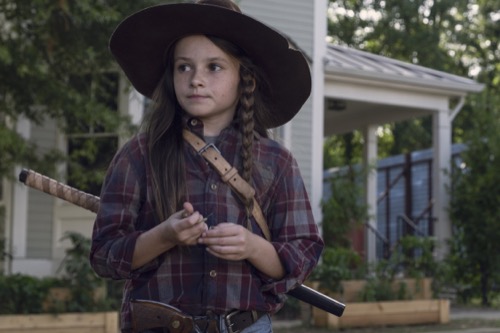 Tonight on AMC our favorite show The Walking Dead airs on an all-new Sunday, November 11, 2018, premiere episode and we have your The Walking Dead recap below. On tonight’s The Walking Dead Season 9 episode 6 called, “Who Are You Now?,” as per the AMC synopsis, “Six years after Rick’s disappearance, a group of strangers tests Alexandria’s trust and patience.”

The show moves ahead years later after Rick’s death/disappearance – Michonne is talking to Rick at the bridge, who she believes is dead. She tells him she will never give up. Daryl is out in the river looking for fish after waking in a tent alone. Carol has just woken next to Ezekiel. She is happy and still living in the Kingdom.

Michonne is out on a run. She looks through a car and sees a box with a toy cowboy in it. She pauses to look at it before putting it in her bag. Meanwhile, Daryl sees a bird’s best and smiles. Carol sees a flower growing in the shade in the cracked pavement. They still continue to see beauty after all that has happened.

The gang calls for Judith in the woods. She runs to them. She tells them she found people who need help. They are right behind her. Walkers are near. She tells Eugene, Rosita, Aaron and the others agree they can come back to the community.

Another pipe bursts. Carol and Henry try to fix it. Henry gets mad. Everything is breaking. Ezekiel tells him to be more positive and watch his attitude. Carol reminds him that Henry is getting older.

Eugene, Judith, and Rosita bring the others back to Alexandria. They hesitate at the gate. Judith tells them they will be safe. She offers her hand to one of them. She takes it and they all head in. The newcomers are in awe. They look around at the windmills, the gardens and more. Michonne arrives. She is intimidating as she looks them over and pats them down. She isn’t happy, they know the rules. Judith tells her she did it. Aaron tells her it was him. One of them is injured with head trauma. Michonne agrees to take them in. They go to holding. Judith sees a toy cowboy on the ground feet away and picks it up.

Ezekiel and Carol say goodbye to Henry as he heads on a mission for the first time. Carol reminds him they have a fair to organize to get everyone back together.

The newcomers stand in front of the Alexandria council to explain who they are and how long they have been. One of them cries. They just lost a member yesterday. They share that one of them is a music teacher, one was a waitress, one a journalist. They all did what they had to survive. Aaron calls for a vote. Michonne stands first before they do. She gets in front of the newcomer Magda and asks her about a tattoo on her hand, a prison tattoo. She also points out that she knows she is hiding a knife in her belt. Magda takes it out. Michonne leaves the room after proving her point.

Gabrielle is playing with the radio alone. Rosita comes in. She thought he gave up on it. He did for a while but he can’t stop thinking there have to be more survivors. If they could only get a better signal. Michonne would see it as a breach. Rosita kisses him and tells him she and Eugene will go look.

Judith comes home to hear Michonne talking to herself, carrying on about what he went through and what she is going through. She hears Judith and stops.

On their travels, Carol and Henry hear a woman screaming for help. Henry runs to help. Carol warns him. He ends up in an ally, Carol is right behind him. It was a set-up. Jed is there with some of the other saviors.

Eugene tries to talk to Rosita about her relationship with Gabrielle but she wants to focus on their mission.

Jed wants everything they have, their food and their supplies. He will spare them since Carol did the same years ago. When he sees Carol’s ring, he tells her he wants it too. Henry gets mad and attacks him. Carol throws herself on Henry after he is thrown down. She hands over the ring.

Judith is working on her math right outside Negan’s prison window. The two talk about how she brought home strangers. Her mom isn’t happy.

Eugene and Rosita attract some walkers when he tries to position a transmitter box on a water tower. On his way down, he is forced to jump and injures his leg. Rosita helps him as he limps away.

That night, Henry is mad at Carol for backing down. She explains that things have changed now that she has him. Someday he will understand.

Magda and the others fight. They are mad she wasn’t honest. She’s mad they think that they can all just go back out there. They are not going to survive. She wants to fight. If she wants to debate and not fight, they will try to see if they can talk to Michonne.

Carol goes back to Jed’s camp in the dark. She is angry they upset Henry. She lights them all on fire before confirming with Jed that he will never see her again.

It’s late, Magda goes to hurt Michonne but sees her with her children. She changes her mind. She knocks on the door and offers a weapon, one Michonne missed. Michonne shows some sympathy after Magda explains that she has done some terrible things. They all have. Judith is waiting on the stairs holding Rick’s gun. She tells Michonne her father would have wanted her too. Judith heads upstairs and Michonne and Rick’s son comes running down the hall. She hugs him.

Henry apologizes to Carol the next day for being angry. He notices she has her ring back but doesn’t say anything. Ahead, they spot Daryl in a clearing. Carol offers him a ride with a smile. Meanwhile, Rosita and Eugene try to escape but Eugene’s leg is slowing them down. He offers to stay behind. She refuses.

Michonne dresses for the day. She has a large x scar on her back. She puts on one of Rick’s shirts. She heads down to tell the newcomers HillTop may take them in. Judith is happy and understands after Michonne hands her the cowboy.

Eugene and Rosita put mud all over themselves to hide from the walkers.