The Young and the Restless Recap for Friday, August 31 – Rey’s Secret Connection Revealed 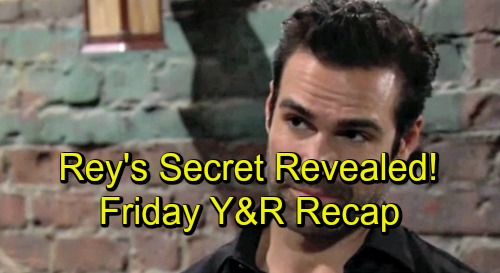 The Young and the Restless (Y&R) spoilers and recap for Friday, August 31, 2018 reveal Tessa (Cait Fairbanks) was the intruder on Newman property and Rey (Jordi Vilasuso) quickly apologizes for traumatizing her. Sharon (Sharon Case) wonders why he would bring a gun to a family dinner at her ranch as a grateful Mariah (Camryn Grimes) hugs her MIA girlfriend. Sharon wants answers from Tessa, as to why she would leave her daughter hanging, while she is off in Canada trying to start a new life for her sister Crystal.

Tessa thanks Sharon for getting Crystal out of the sex trafficking ring and hopes to earn her trust back. Mariah begs Sharon to give her a chance, just like she gave her and Nick (Joshua Morrow) another chance. The two women take off to Crimson for some coffee; once they sit down, Mariah demands to know the whole truth, since both her and Sharon know she is hiding something.

Tessa reveals that the people who helped Crystal in Canada now what $20 Grand and sent her back to Genoa City to get it, and if she doesn’t return with it, they will come get her and that is why she was so freaked out when that guy Rey grabbed her. Tessa promises they will figure things out, but not tonight!

Rey goes straight to Victoria’s (Amelia Heinle) office, from the ranch, but she ignores Sharon’s warning call when he arrives. She doesn’t believe that Rey is there to apologize and knows he is there for information on JT (Thad Luckinbill). He admits that he’s there to figure out who used the cards and didn’t pay the bill; revealing a source told him it really wasn’t JT at all! He is curious how Victoria would feel safe working alone and late hours with JT loose somewhere.

Victoria offers to pay off any balance JT owes to get Rey to leave. Rey leans in, telling her that he is positive she knows more that she is saying or she wouldn’t be so eager for it to all go away. She is in way over her head!

Rey leaves the office and makes a quick phone call, saying, “She bought it!” Back in her office, Victoria listens to the message Sharon left for him, goes through her purse and immediately calls Nate (Brooks Donnell) terrified, begging him to rush over to her office.

Nate arrives within minutes, saying he ran over and that she made the right choice. After checking her over, he assures her it wasn’t a heart attack but a panic attack. He takes her back to his and Neil’s (Kristoff St. John) place, where she drinks water and reveals how foolish she feels that this is exactly what happens everytime she thinks of KT, bring her back to when he would choke her. Nate attempts to comfort her, but she feels stupid and bolts upstairs.

After cleaning herself up, she tells him she will pay him in the morning and expects this to be a patient/doctor confidentiality thing. He begs her to seek therapy, which she refuses and apologizes for burdening him and it will never happen again; she quickly leaves the apartment.

Lily (Christel Khalili) and Cane (Daniel Goddard) are having dinner with attorney, Michael (Christian LeBlanc) who worry this might be her last free meal for a long time. Michael promises he will do everything he can to lighten the sentence, but when Cane tries to lighten the mood, Lily is tired of the pep talks and simply asks him to give her a night she will remember for the next 20 years.

They are enjoying an intimate table for two, when Devon (Bryton James) spots them, Cane follows Devon to the bar, trying to reassure him this isn’t anything they are trying to throw in his face. Devon understands, reminding him this isn’t about Lily! He tells them to go enjoy themselves.

Victoria finds Devon at the bar, who reveal her father, Victor *Eric Braeden) gave him some sage advice about the whole situation. She says everyone feels sorry for his loss but he thinks that doesn’t include Lily and Cane. Victoria admits she sees it from both sides, even though Devon cannot and he feels any one who truly loved Hilary (Mishael Morgan) should never let this go either!

Devon retreats up to the Dive Bar, where he finds Michael, who reminds Devon that the only person who hasn’t asked him to go easy on his sister, is Lily herself and that is because she doesn’t want the entire family to go through a long battle. When Devon says he loves Hilary, Michael reminds him that he has that chance to say it in court, but that it is also evident in Devon’s lack of actions that Hilary would have wanted him to have his family around him if anything happened to her.

Charlie (Noah Alexander Gerry) and Mattie (Lexie Stevenson) smile as they watch their parents post goofy photos of their romantic night together when Shauna (Camryn Hamm) walks into Crimson. Charlie and Shauna are happy to see each other and happily agree to reunite as a couple. Meanwhile, Lily and Cane watch as a plane flies over them, both agreeing if they could be anywhere right now, they would be right back in Paris!

Devon returns home to find Shauna there. She tells him that she got back together with Charlie. He is surprisingly okay with it, as long as they are together in public. They talk about the hearing, as she is scared about what to say. He suggests talking from the heart and the only words that matter are Hilary’s as he won’t allow his family steam roll her. Shauna wonders what Devon is going to say and how much he blame he is going to lay on Charlie’s mom?

On the rooftop, Lily and Cane c lovingly in each others arms, as she admits she feels like she is dancing in the clouds. She worries about court, but Cane promises they will come out on the other side stronger. In the split screen, Devon climbs the dark empty stairs alone in his condo.