The Young and the Restless Spoilers: Abbott Family Torn Apart By Dina’s Illness And Sad End

BY Sean O'Brien on February 7, 2018 | Comments: one comment
Related : Soap Opera, Spoiler, Television, The Young and the Restless 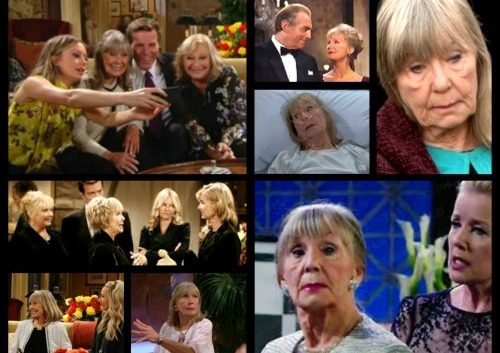 The Young and the Restless spoilers tease that the Abbott family will remain in turmoil in coming months. No one should expect the ever-competitive brother-sister tandem of Jack (Peter Bergman) and Ashley (Eileen Davidson) to make peace with each other. Instead, ongoing skirmishes will wear on one of Y&R’s legacy units.

Outstanding scenes that involved the always-welcomed Beth Maitland (Traci), Jason Thompson (Billy), Bergman and Davidson continued in the aftermath of the Alzheimer’s arc. Poignant exchanges, most especially including the one between Maitland and Davidson in the Abbott mansion’s foyer proved memorable.

The earlier sight of poor Traci’s heart breaking, when Dina (Marla Adams) couldn’t recall that she had a daughter, likely evoked emotions in viewers who’ve experienced a similar situation with a family member, or friend. That was followed by Traci rightly admonishing Jack and Ashley about their inability to put petty business differences aside.

A later set of dueling scenes showed Maitland and Davidson sitting aside of each other in the foyer. The emotion both actors emitted ranks with, or actually was, the arguably greatest work either always superb actor has offered in years. There presence speaks to the benefits tenured cast members avail.

Meanwhile, in the dining room, Billy’s evolution into the responsible brother persisted as he spoke with regretful Jack. Both character’s turns are quite remarkable when considered within the history of this show. Billy is stable, while Jack author’s self-inflicted wounds, the likes of which he hasn’t produced before.

There are no easy solutions for Ashley or Jack because what’s happened to their mother isn’t going to be solved. That fact will leave both mature adults choosing to focus on work, rather than family. The solace other tortured souls turn to when they defer confronting crucial issues within their personal lives.

Y&R’s outstanding writing staff must be credited with crafting such fine daytime drama. The intertwined storylines are fully believable and provide all actors, including Adams via video chat, the chance to shine once more.

This scribe obviously considers the Alzheimer’s storyline and all resultant fallout to rank with the best tales told by Y&R this decade. Kudos to executive producer and head writer Mal Young, his team and everyone else who’s connected to this iconic show. Soap operas are most compelling when wide swaths of the audience relate to what’s presented and as evidenced by outstanding actors who are working at the top of their craft.