The Young and the Restless Spoilers: Adam Newman Needed Back in Genoa City – Nick, Billy and Rey Can’t Compete 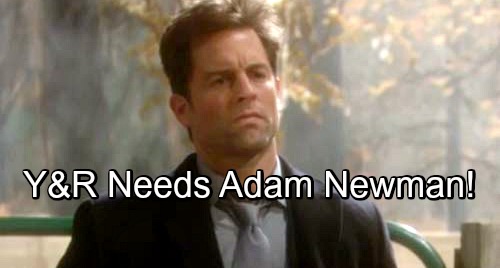 The Young and the Restless (Y&R) spoilers reveal that the CBS soap’s in dire need of a familiar character. They’ve got several hunks in major stories, but not the one most fans are clamoring for. Of course, we’re talking about Adam Newman!

Many Y&R watchers would love to see Michael Muhney in the role again, but a recast would work as well. People just want Adam back in Genoa City. The show could really use Adam to shake things up and provide the drama viewers are looking for.

Let’s consider the other main male characters on canvas right now. Billy (Jason Thompson) had sex with Summer (Hunter King) just to get revenge on Phyllis (Gina Tognoni). That was awfully cruel, especially since Phyllis and Billy were on a break at the time of the so-called betrayal.

For all Phyllis knew, they might never have gotten back together. She was under no obligation to stay loyal during a breakup. Next, we have Nick (Joshua Morrow) – who’s basically trying to be a second-rate Adam. Plenty of Young and the Restless fans aren’t feeling Nick’s dark turn and sleazy behavior.

Nick cheated on Sharon (Sharon Case) over a misunderstanding and relentlessly pursued a reunion after the truth came out. As soon as Nick knew Sharon wouldn’t take him back, he slept with Phyllis again. That wouldn’t be so bad if Nick wasn’t flaunting his romance all over town. That includes Crimson Lights, where Nick knew Sharon would see them. Nick only cares about himself and what he wants.

As for Rey (Jordi Vilasuso), he’s a detective and not much else. Y&R isn’t letting Rey have a real personality yet, so he doesn’t have much going for him other than great looks. Plus, Rey’s been professing his feelings for Sharon all while keeping tabs on her in his little notebook. He has a good reason to be suspicious, but that still seems awfully two-faced.

Adam certainly made his fair share of mistakes, but he owned them. He was also hopelessly devoted to Chelsea (Melissa Claire Egan) and their future. Adam would do anything for the woman he loved. He could be conniving, but that was easier to tolerate with someone like Adam. When a guy’s that smooth, it’s tough to be mad!

Adam didn’t seem to have the same victim mentality as whiny Billy and Nick. He could also pull off the whole smug thing better than Rey. It’s clear that Adam’s the leading male character we all need and deserve!