The Young and the Restless Spoilers: Adam Newman or J.T. Hellstrom – Newman Enterprise Attacker Back From the Dead For Revenge?

BY Sean O'Brien on June 21, 2018 | Comments: one comment
Related : Soap Opera, Spoiler, Television, The Young and the Restless 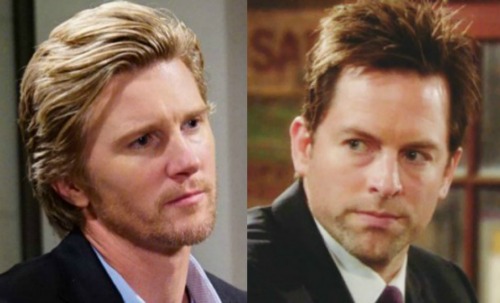 The Young and the Restless spoilers tease that a mysterious person is attempting to attack Newman Enterprises. Is it more likely that Adam Newman (most recently played by Justin Hartley), or J.T. Hellstrom (Thad Luckinbill) is the person who made recorded verbal threats and then sent reams of sensitive corporate documents to Victoria (Amelia Heinle) this week?

Okay, assuming that either person scrambled his voice also, obviously implies that one, or the other dead man is alive. Let’s see who that could be in either, or both instances.

Adam was seemingly blown to bits by Chloe (Elizabeth Hendrickson) in September 2016. He was either removed from the cabin where he was handcuffed to the bed and drugged by someone before it blew, somehow escaped in time, or lived through the blast.

Why Adam wouldn’t have returned to Genoa City since then is a great question. Possibly he had amnesia, or simply felt it best to keep his distance to protect Chelsea (Melissa Claire Egan), Connor (Gunner and Ryder Gadbois), and Christian (Jude and Ozzy McGuigen).

J.T. was killed earlier this spring by Nikki (Melody Thomas Scott). It was her third such offing, following the past self-proclaimed justified erasures of her father and Diane Jenkins (Maura West) in years gone by.

Logically, no human being could survive being buried in Chancellor Park for any period of time. But the efficiency of the four-person (Vickie, Amelia Heinle, Nikki, Phyllis, Gina Tognoni, and Sharon, Sharon Case) burial staff’s work wasn’t shown to the audience. So, yes, J.T. could have survived. His work as a detective would be allowing him to have remained in hiding ever since.

Circling back to Adam, he’d made peace with Victor before leaving. But he could be harboring a grudge that was passed through Chelsea, assuming she and Connor somehow found him.

Although, if Adam is on his own and is still suffering from amnesia, then he wouldn’t be acting like himself. Well, he might not even look like he used to either. Hint, hint, Michael Muhney’s return?

J.T. twice tried to kill Victor because Luckinbill’s character had been purposely written off the rails. Knowing what happened to him, J.T. would still have vengeance on his deluded mind.

Of course, there are plenty of other possibilities. A returnee character who hasn’t been mentioned, or a new fictional personality bent on revenge that’s been invented. Someone wants to bring Newman Enterprises down for an as yet unknown reason. How intriguing it would be if that person turns out to be Adam Newman, or J.T. Hellstrom. CDL is a leading source for everything linked to The Young and the Restless. Check back regularly for Y&R spoilers and news!