The Young and the Restless Spoilers: Adam Newman’s Return Brings Chelsea Back To Genoa City

BY Marcy Cohen on August 29, 2018 | Comments: one comment
Related : Soap Opera, Spoiler, Television, The Young and the Restless 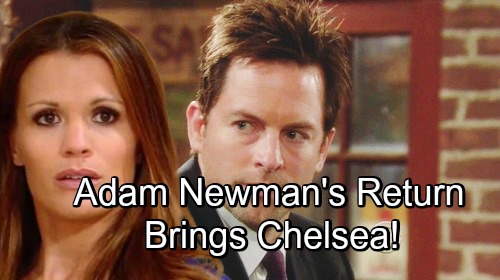 The Young and the Restless (Y&R) spoilers tease that the CBS soap needs to make a bold move. Y&R fans are feeling unsettled thanks to some negative changes. Losing Hilary (Mishael Morgan) was a tough blow, but that was only the beginning. Christel Khalil’s now off contract as Lily, so she’ll be probably be fading out for the most part. Ashley’s (Eileen Davidson) set to leave in September as well.

After all these difficult shifts behind the scenes, it’s time for some positive changes at the show. What could turn things around? The Young and the Restless could certainly get rid of Mal Young, Y&R’s head writer and executive producer. That could help with some of the story missteps, but they still need something to make a big splash on screen.

Whether Young stays or goes, Y&R could use a shocking return to stir up some buzz. There’s one comeback that fans consistently ask for. On any given day, there are dozens of requests for this popular character on social media. Of course, we’re talking about our beloved Adam Newman!

If The Young and the Restless wants to steer this ship in the right direction, Adam’s return could help. They could get oodles of drama out of that. Nick (Joshua Morrow) is too much of a softie to be a bad boy. Adam’s the one who should be stuck in a contentious relationship with Victor (Eric Braeden). Their complicated history would feed the feud and drive the story forward.

Adam could find a way to snatch up Dark Horse for himself and go against his father. After they inevitably called a truce, Dark Horse could become part of Newman. Adam would be poised to take over the whole company and start a fierce war with Nick. Naturally, Adam would come out on top!

This would be a great opportunity to bring Chelsea (Melissa Claire Egan) back in the picture, too. Egan might be up for a return of her own. As for Adam, Y&R could recast or even reach out to Michael Muhney. Bringing back the latter would definitely convince Muhney’s supporters to tune in.

Either way, Adam Newman’s comeback could be just what the doctor ordered for Y&R. The Young and the Restless spoilers say some surprises are brewing, so you never know what might happen later this year. We’ll give you updates as other Y&R news comes in. Stick with the CBS soap and don’t forget to check CDL often for the latest Young and the Restless spoilers, updates and news.