The Young and the Restless Spoilers: Are Billy and Kyle Two Scoundrels – Worse For Jabot Than Phyllis? 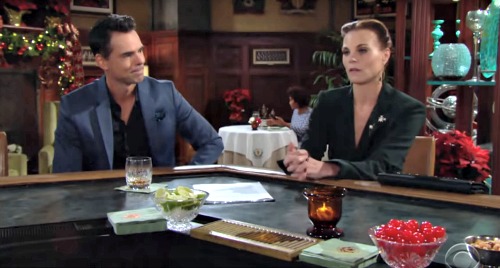 The Young and the Restless spoilers tease that Phyllis (Gina Tognoni) won’t be able to take her eyes off Billy (Jason Thompson), or Kyle (Michael Mealor) anytime soon, if ever. Despite Ashley’s (Eileen Davidson) exit and Jack’s (Peter Bergman) continued absence at his own family company, the drama continues at Jabot.

Billy and Kyle don’t like each other. But they share a common character trait that makes them far more like Dina (Marla Adams), than John (Jerry Douglas). They’re sneaky. If John were alive, he would likely support Phyllis and chide his offspring.

So, there’s Phyllis. Yes, she’s as unlikely a Chief Executive Officer of this major cosmetics company that there has ever been, among the rotating chiefs within the past few months. But she earned the slot fair and square and deserves everyone’s support because that’s in the best interest of company.

Billy and Kyle could care less about what’s good for Jabot. Instead, they are merely trying to further their own efforts to gain, or reclaim power. That’s why their dealings with an executive are super suspicious, as Phyllis hopefully learns.

Why would Jabot reinstall Billy at any point in the near future? This gambler embezzled company funds to cover his habit, which could have, maybe should have landed him in jail. But he skated because his family protected him.

And what about Kyle? Here’s a chap who voluntarily sought out Victor Newman (Eric Braeden), his dad’s known worst enemy, while living in New York. Kyle did that as part of a truly dishonest attempt to bring Jack down. An honest person doesn’t even think of doing that, let alone follow through on it.

Meanwhile, Phyllis has taken responsibility and made not one, but two savvy choices since becoming CEO. She skillfully procured Kerry (Alice Hunter), who was desperately needed to fill the chemist’s hole Ashley left behind. Then Phyllis smartly named Lauren (Tracey Bregman) as her Chief Operating Officer.

The head of Fenmore’s is the exact, right choice. Lauren is already a full business partner with Jabot and she possesses the type of leadership experience that Phyllis needs to tap into as she learns on the job.

Don’t the Abbott boys (yes, boys not men) know that bringing down Phyllis would destabilize the company just as the Jabot CEO has managed to restore confidence among its business partners and the public? Apparently not.

Blind ambition, by two people who also plan to cut the other’s throat if Phyllis is pushed out, is ugly. Y&R fans will soon learn if Miss Summers and her allies are able to fend off Billy-boy and Brazen Kyle. In the meantime it would be great if Douglas was written back into the script so John’s spirit could talk sense to Billy and Kyle.