The Young and the Restless Spoilers: Arturo and Rey’s Mutual Hostility – A Woman Came Between Them?

BY hellodrdavis on September 15, 2018 | Comments: one comment
Related : Soap Opera, Spoiler, Television, The Young and the Restless 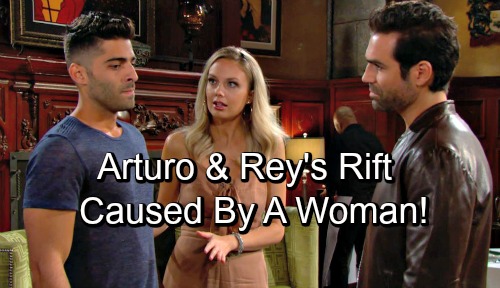 The Young and the Restless spoilers tease that the tension between Rey (Jordi Vilasuso) and Arturo (Jason Canela) isn’t going to get any better. The two brothers can barely stand to be in the same room with each other, let alone carry on a civil conversation. Arturo in particular doesn’t want to be anywhere near Rey, so what’s going on there?

Things are probably going to escalate between the brothers as Rey ingratiates himself into the Genoa City scene. Rey has arrested Arturo’s new boss, Nick (Joshua Morrow), which is going to irritate Arturo. And Rey is adamant that Abby (Melissa Ordway) stay the heck away from Rey.

Clearly, something major went down between these brothers in the recent past. As Rey told the story to Abby, Rey took on the “man of the house” role after their father left, and Arturo resented it. But there’s got to be more to it than that. Recently, Rey referred to something that Arturo had done in the past, saying “you know what you did.”

Exactly what went down between Rey and Arturo to cause such bad blood remains to be seen, but there’s one glaring possibility. It may have had something to do with a woman in their past. Could Arturo and Rey have been interested in the same woman, or perhaps Arturo stole Rey’s girlfriend or wife?

Rey recently told Sharon (Sharon Case) that he had a wife and that they were “on a break,” so perhaps the rift has something to do with her. We know that Arturo has a fondness for older women, given his affair with Nikki (Melody Thomas Scott), so it’s possible that Arturo got too close to Rey’s wife.

Time will tell what the true nature of the problem between Rey and Arturo is. What do think caused the rift between them? Stay tuned to the CBS soap and don’t forget to check CDL often for the latest Young and the Restless spoilers, updates, and news.