BY Sean O'Brien on August 13, 2018 | Comments: one comment
Related : Soap Opera, Spoiler, Television, The Young and the Restless 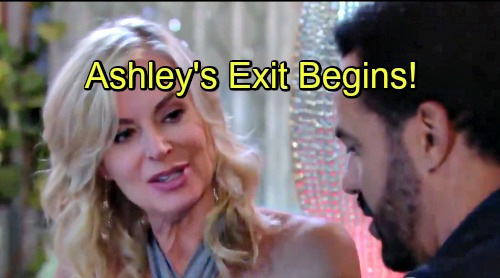 The Young and the Restless spoilers tease that unless a recast is planned, Ashley (Eileen Davidson) is beginning a short-term relationship on ‘The Young and the Restless’. Her draw back to Neil (Kristoff St. John) revives a romantic link that was seen in the past, while opening a question about the future of the character Davidson has played many times.

Y&R has recast the Ashley character various times since Davidson first embodied the role in the mid-1980’s. As crossover B&B fans know, this fine actor has also played her alter ego in Los Angeles.

Davidson’s most recently announced, voluntary departure establishes the seeming again exit of Miss Abbott. However, until the next up to handful of months pass, Ashley has some personal and professional business to settle.

Neil is a friend and he’s been more than that. Both people are single and weren’t looking for a relationship. Both factors are cited by those of us who’ve been in similar positions and opted to take that comfortable leap.

It’s good to see St. John having returned to the role that made him famous. A good soul, he’s battled through the loss of his son earlier this decade and easily ranks with the greatest all-time Y&R actors.

Neil’s emerging personal storyline will allow him to be seen in scenes that aren’t mostly focused on Devon (Bryton James) and Lily’s (Christel Khalil) issues. Whether Nashley progresses to something serious will soon be known.

Ashley’s burgeoning romance should help to play off the tension that continues to exist at Jabot. While she encouraged her apparent genetic brother Billy (Jason Thompson) take the reigns at their family company, his internal character flaws have again emerged, which is troubling.

Jack (Peter Bergman) is currently a non-Abbott, which puts him in the Dina (Marla Adams) basket. But hardcore Y&R fans continue to believe (hope) that storyline is more of a lark than a historical-plot changer.

Therefore, it’s reasonable to believe that Ashley will prove central to Billy’s ouster before she departs Genoa City, assuming no other actor supplants Davidson. Along with that would be the restoration of Jack as Chief Executive Officer because he was, is, and will always be an Abbott, unlike Ashley.

Jack comes back, Ashley is blocked from assuming power and leaves while also kissing Neil goodbye? Maybe. In any regard, Davidson’s presence will be missed. The tenured soap star, who’s also played multiple, great roles on Days of our Lives, will hopefully be seen as Ashley in Genoa City again.