BY Kinsley Goldman on July 12, 2018 | Comments: one comment
Related : Soap Opera, Spoiler, Television, The Young and the Restless 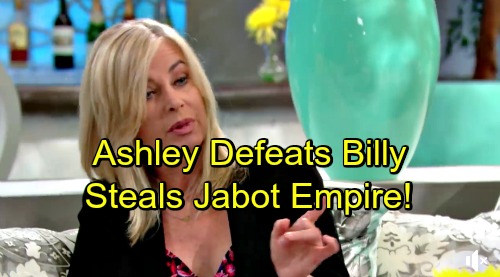 The Young and the Restless (Y&R) spoilers tease that Ashley’s (Eileen Davidson) curiosity will spell trouble for Billy (Jason Thompson). In Thursday’s episode, Ashley pokes around Billy’s office and searches for the yacht title. Later, she grills Phyllis (Gina Tognoni) about Jaboat and faces accusations of trying to dig up dirt.

Whether Ashley wants to admit it or not, that’s exactly what she’s doing. Billy seemed nervous when Ashley insisted on coming back to the company. He’s a newer CEO with risky secrets and Ashley’s a snoopy sister with a craving for power. That’s obviously a dangerous combo! It’s only a matter of time until Ashley makes a play for the throne.

Billy’s doing his best to win back the yacht and put this mess behind him. Unfortunately, he’s racking up gambling debt and feeding his addiction in the process. Even if Billy pulls this off, he may not be too hooked to stop now. Billy could easily create more Y&R mayhem and get stuck again.

Of course, Ashley will stay on top of the yacht situation and any other mystery that arises. She’s bound to trip Billy up and when she does, there’s going to be major drama. Ashley recently offered Neil (Kristoff St. John) an insider tip that he happily used to Hamilton-Winters’ advantage. That proves she’s willing to get sneaky and leak things when need be.

It’s clear that Ashley wants to take Billy’s place as Jabot’s CEO. How far will she go to make it happen? Ashley probably won’t have to work too hard thanks to Billy’s self-destruction. Whenever Billy has a good thing going, he always finds a way to screw it up. The Young and the Restless spoilers say Billy will do just that with his gambling problem.

Billy’s relationship with Phyllis could take a serious hit and Ashley will inevitably use this shocker against him. Ashley could spill the news anonymously to GC Buzz or anyone else who will listen. If she wanted to be a bit more discreet about it, she could just take the info to the board. Either way, Billy probably won’t be Jabot’s leader for long!