The Young and the Restless Spoilers: Billy Steps Up as Hero – Jack’s on a Dangerous Path

BY Heather Hughes on May 10, 2018 | Comments: Leave Comments
Related : Soap Opera, Spoiler, Television, The Young and the Restless 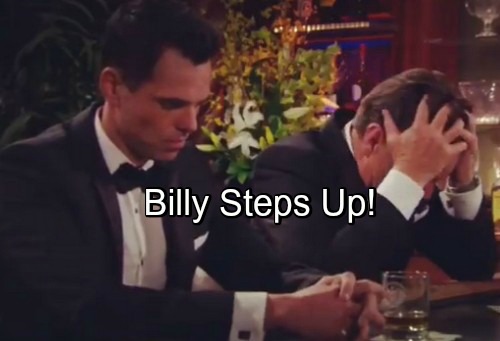 The Young and the Restless (Y&R) spoilers tease that Billy (Jason Thompson) will ride to the rescue. He’ll step up to do something rather heroic on next week’s new episodes, May 14-18, so let’s consider how this might play out. We know that Jack (Peter Bergman) will be struggling thanks to the paternity revelation. The news that he isn’t John’s (Jerry Douglas) son will leave him broken and unsure of who he is anymore.

At some point, Jack will surely realize why Kyle (Michael Mealor) was so anxious to get rid of the blood-Abbott clause. He may even think Billy was in the loop, but his brother will assure him he had no idea. Jack may worry about what’s going to happen next, but perhaps that’s where Billy the hero comes in. He’s the true heir to the Jabot throne now, but that doesn’t mean he has to take advantage of it.

Maybe Billy will take charge briefly with a simple goal in mind. He might move in the CEO spot just to gather the board and eliminate the clause. If that Y&R mission’s accomplished, Billy could hand the reins back over to Jack. He doesn’t want to make all this tougher than necessary. It’d be comforting for Jack to keep his leadership role at the company.

Of course, Kyle could suddenly change his mind and put up a fight. Despite the fact that it’s foolish, Kyle seems determined to prove himself to Victor (Eric Braeden). He’s only going to get burned in the end, but he’ll just have to learn that lesson the hard way.

Regardless, The Young and the Restless spoilers say things are going to be rough for Jack in the coming weeks. There’s no escaping that. No matter what plays out at Jabot, Jack will still wrestle with difficult feelings. He’ll feel like his life has been a lie somehow. Being John’s son and a strong Abbott are a huge part of who Jack is. He’ll struggle to figure out his identity outside of that.