BY Marcy Cohen on August 10, 2018 | Comments: one comment
Related : Soap Opera, Spoiler, Television, The Young and the Restless 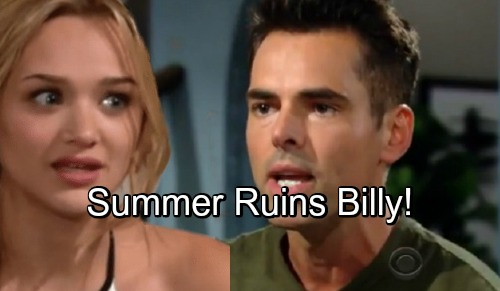 The Young and the Restless (Y&R) spoilers tease that Ashley (Eileen Davidson) and Kyle (Michael Mealor) will stick to the plan. Billy’s (Jason Thompson) gambling again, but it seems to extend far beyond the poker table. He’s also taking too many risks at Jabot, so Kyle and Ash are ready to stop the destruction. They have to do something before Billy runs the family business into the ground.

Billy’s latest move will really be the last straw. He’s opening Jabot boutiques in 30 cities and that’s an excessive number start out with. Ashley will probably fear financial ruin if Billy keeps making gutsy calls like this. Sometimes risks pay off and other times they can cost you big time. In this case, Ashley would rather avoid potential consequences than hope for a reward.

However, Y&R spoilers say Billy will remain confident in his decisions and strategies. That could actually work to Kyle and Ashley’s advantage. If Billy gets too cocky, he’ll think he’s untouchable. Billy will never see their takedown plot sneaking up on him.

The Young and the Restless spoilers say Kyle will make a bold move next week. He’ll do some digging and come up with some damaging proof. This evidence could relate to another story like Phyllis’ (Gina Tognoni) hookup with Nick (Joshua Morrow), but it certainly makes sense here as well. Ashley will be revving up the pressure, so Kyle will try to come through for her. He owes Ash his loyalty right now.

Kyle may score proof that Billy used company funds inappropriately. Billy tried to cover his tracks with all the yacht drama, but that could still come back to bite him. That could be exactly what Ashley and Kyle need to get Billy kicked off the throne. If not, there’ll surely be some other crafty maneuver they can use. One way or another, Billy will likely lose his job as Jabot’s CEO.

Of course, Billy will also be dealing with some relationship issues. The truth about Phyllis’ one-night stand has to come out at some point. Billy should be furious when he learns Phyllis slept with Nick. Phyllis’ upcoming kiss with Jack (Peter Bergman) will be another major blow.

In other words, Billy’s entire life is on the verge of falling apart. Summer will inevitably exploit his pain, but will she make things better or worse? Regardless, Billy’s downward spiral will bring loads of Young and the Restless chaos. We’ll give you updates as other Y&R news comes in. Stick with the CBS soap and don’t forget to check CDL often for the latest Young and the Restless spoilers, updates, and news.