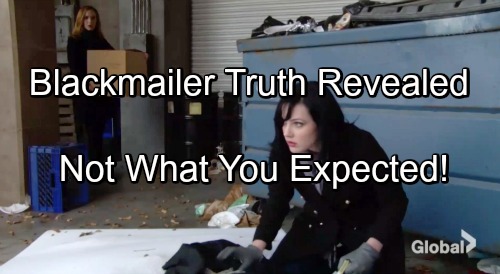 The Young and the Restless (Y&R) spoilers tease that there’s one topic everybody seems to be buzzing about. Y&R has several important storylines going on, but it’s the mysteries that keep us curious. The biggie right now is who’s blackmailing the cover-up crew.

Thanks to Tessa’s (Cait Fairbanks) cash stash, many fans are convinced she’s the culprit. The Young and the Restless has been heavy-handed with the hints, but is it some classic soap trickery? Is Tessa actually guilty or is she just a giant red herring? There are some major clues to keep in mind, so let’s break it all down.

For starters, we should talk about Fairbanks’ recent interview with CBS Soaps in Depth. She suggested that Tessa’s secret would be “more messy than explosive.” Now consider the fact that Tessa is dating Mariah (Camryn Grimes) and Sharon (Sharon Case) is part of the girls’ night gang.

If Tessa blackmailed her girlfriend’s mother and her accomplices for $250,000 – over a dead body, no less – we’d say that sounds pretty darn explosive. That’s far beyond messy; that’s a nuclear bomb!

Next, we should remember the November sweeps info. Victoria (Amelia Heinle) will step up to handle the blackmailer after he or she is revealed. Why wouldn’t fierce Mama Sharon be the one if Tessa were to blame? She’s finally starting to trust Tessa again and she’s thrilled that Mariah’s happy. You’d think Sharon would unleash her wrath, not Victoria – who doesn’t really even know Tessa.

Plus, the blackmailer was skilled at covering his or her digital tracks. The money was also wired to an offshore account. This seems like the work of someone wealthy and powerful. Tessa is obviously neither of those things – unless you count the stacks of money, which she isn’t spending. That brings us to another interesting point. Why hasn’t Tessa paid the goons and eliminated the threat?

Just before Halloween, Tessa was on edge over the person who’d been following Mariah. She feared it was connected to the attack she faced, which was confirmed as real due to the bruises and Nate’s (Brooks Darnell) examination. Tessa had no reason to bring up the threat unless she was genuinely worried. That means the smugglers don’t have their money, but why? The cash is right there!

All of this makes us think the money may not be Tessa’s to give out. It’s possible she’s keeping it for someone. Perhaps Tessa is being blackmailed herself. After all, she’s got plenty of secrets regarding Crystal (Morgan Obenreder), the smuggling operation and her whereabouts. Whether it’s somebody’s drug money or something else, Tessa must have a reason to leave it sitting idle in her apartment.

Of course, we can’t rule out the idea that Y&R will go against all the hints. They’ve done it before in other stories, so it’s possible Tessa’s indeed part of the blackmailing plot. However, we’d argue that she couldn’t pull it off alone. If Tessa’s involved here, she’s probably playing second banana to a force more formidable than her.

Regardless, The Young and the Restless spoilers say Tessa’s motives aren’t nefarious. This is about protecting the people she loves, not getting rich or pulling a con job. Do you think Tessa’s the blackmailing culprit or is this some soapy misdirection? We’ll give you updates as other news comes in. Stick with Y&R and don’t forget to check CDL often for the latest Young and the Restless spoilers, updates, and news.

Characters on #YR – they’re just like us! Find out more about how some of the cast relates to the who they play. Which resident of Genoa City do you relate to the most? pic.twitter.com/3H2I8N4jpH