The Young and the Restless Spoilers: Blind Item Hints at Scrapped ‘Shick’ – Nick and Sharon’s Future in Jeopardy?

BY Kinsley Goldman on May 15, 2018 | Comments: 2 comments
Related : Soap Opera, Spoiler, Television, The Young and the Restless 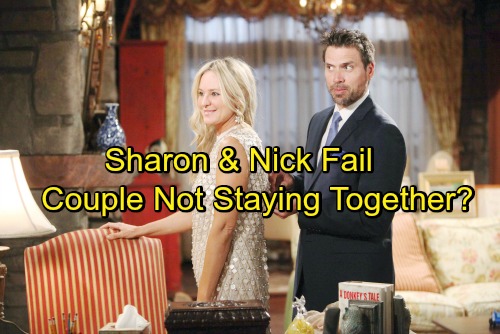 The Young and the Restless (Y&R) spoilers tease Sharon (Sharon Case) and Nick (Joshua Morrow) will have to make a decision. They recently started hooking up again, but they’re just friends with benefits for now. At some point, they need to determine if they’re in or out.

During the week of May 14-18, Nick and Sharon will settle on a plan for their future. Now that they’ve reignited their passion, they may realize they can’t stay away from each other. Perhaps Sharon and Nick will decide to just take the leap.

However, there could be a big obstacle. Sharon’s been telling lie after lie and that’s certainly not going to be OK with Nick. They recently rehashed the past, which included Nick’s issues with Sharon’s deception over the years. Secrets have always been a real problem for this Y&R duo and that trend will continue.

The Young and the Restless spoilers say Nick will learn the truth eventually. He’ll realize that Sharon, Victoria (Amelia Heinle), Nikki (Melody Thomas Scott) and Phyllis (Gina Tognoni) were involved in an elaborate cover-up. Sharon’s known J.T. (Thad Luckinbell) was dead the whole time, but she let Nick roam around looking for him like a fool.

The fact that Sharon lied to Nick’s face will be a major concern. Will lack of trust be a deal-breaker? Nick may wonder if Sharon’s feelings for him are even genuine. After all, Sharon blurted out her desire for Nick to throw him off the J.T. trail. She was being honest about what she wanted, but her timing and motives were all wrong.

A new blind item could spell trouble for “Shick.” Soap Opera Digest reveals that a once popular pairing may not get another chance at happiness. The blind item, which could apply to any of the four soaps, says fans hoping for this pairing’s reunion shouldn’t hold their breath. The actress is eager for a new beginning, but the actor isn’t on board.

Could Joshua Morrow have reservations about being paired with Sharon Case again? She tends to pop on screen while Morrow’s style is more low-key. Maybe he’s afraid Case will outshine him. Then again, Morrow is supposedly an easygoing family man. He seems content with what he’s been doing, so perhaps he just isn’t looking for a ton of extra airtime. Sharon’s a handful, so Nick would be busy!

Regardless, Nick and Sharon’s future isn’t guaranteed! The Young and the Restless viewers will be anxious to see what’s ahead for them. We’ll give you updates as other Y&R news comes in. Stay tuned to the CBS soap and don’t forget to check CDL often for the latest Young and the Restless spoilers, updates, and news.