BY Heather Hughes on July 27, 2018 | Comments: one comment
Related : Soap Opera, Spoiler, Television, The Young and the Restless 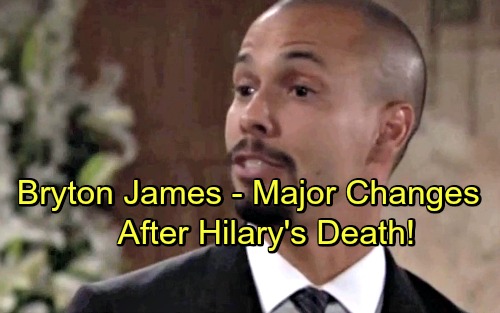 The Young and the Restless (Y&R) spoilers tease that Devon (Bryton James) will find himself stuck in darkness. Hilary’s (Mishael Morgan) death will leave a huge void in his life, but he’ll try to ignore his pain initially. Of course, Devon’s downward spiral will follow. As more details about the accident are revealed, Devon will make decisions that could change his family forever.

In an interview with TV Insider, Bryton James opened up about Hilary’s gripping exit story and all the drama it’s bringing. For starters, what did James think about the deathbed nuptials? “This wedding is not only a gift, but it’s a logical thing for Devon to want to do,” James said. “The fans have wanted to see us together and happy for so long.”

Alas, that happiness wasn’t meant to last. After Hilary’s demise on Friday, Devon will have to carry on without her. Of course, he’ll never forget the love they once shared. James just doesn’t think “Hevon” can ever be topped. “This has all made Devon realize that this woman is the true love of his life,” James said. I can definitely say that, for as long as I can perceive, he’ll see her as his one true love.”

Now Y&R’s entering the next phase of the story, which is sure to be just as heartbreaking. Lily (Christel Khalil) and Devon had a great bond before the crash, but that’s going to change soon. The Young and the Restless spoilers say Lily’s real role in the accident will be exposed. Devon will inevitably blow his top and shut Lily out of his life.

“It’s going to make an impact when it comes out she ran a red light,” James said. “When Devon learns the truth of Lily’s full involvement, it’s going to be a turning point and a big shift in the dynamics within the family.” The Young and the Restless spoilers say Neil (Kristoff St. John) will try to place peacemaker, but that should be tough. It’ll be a while before Devon can even think about forgiveness.

James finished with a promise of shakeups for the Winters fam, so don’t miss shockers ahead. We’ll give you updates as other Y&R news comes in. Stay tuned to the CBS soap and don’t forget to check CDL often for the latest Young and the Restless spoilers, updates, and news.