The Young and the Restless Spoilers: Cait Fairbanks Dishes on Mariah & Tessa – Romance Heats Up But Tessa’s Got A Secret 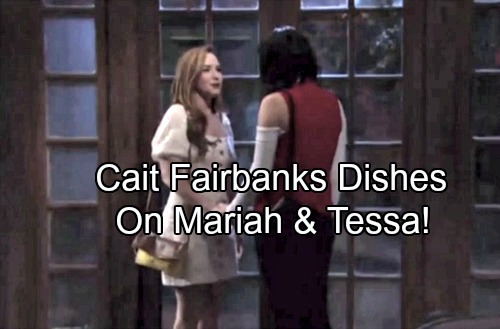 The Young and the Restless spoilers tease that Mariah (Camryn Grimes) and Tessa (Cait Fairbanks) will be getting closer on new Y&R episodes this week, July 16-20. Thanks to a little matchmaking by Kyle (Michael Mealor) and Devon (Bryton James), the two ladies enjoyed a fun movie date night.

Cait Fairbanks, who plays Tessa, recently told CBS Soaps In Depth, “They’ve fallen back into their old rhythm but it’s still not quite the same. Wounds are still a little tender, so Tessa is tiptoeing around to see how things go between them, but I think they’re both ready to let their guard down.”

Cait continues, “They’re just waiting for one person to say ‘Everything’s forgiven and we need to move on.’ Tessa is hoping that it’s moving forward together, but they have to forget the unpleasant stuff that happened between them.”

It looks like the two will make a solid effort to move forward, but Tessa may be on board a bit quicker than Mariah is. According to Y&R spoilers, Mariah’s tendency will be to hold back a bit, unsure of where she stands with Tessa. Mariah’s really afraid of rejection, so she wants to be sure that she’s reading Tessa right and that Tessa really wants her.

Something that Mariah won’t be expecting are secrets, and Tessa’s got one. During their time together, Tessa will get a call from an unknown person, likely the same person who has been sending her cryptic texts. Tessa will talk to the person out of earshot of Mariah, and the call will involve whether “anything went wrong” and “do they have the money.”

Whatever the call’s about, it sounds mysterious, and it won’t be something that Tessa will want to discuss with Mariah. According to Cait, “Tessa will always be mysterious; I think it’s my black hair. For Tessa, romantic relationships were never a priority, so there will always be personal situations that will interfere.”

At some point, though, Mariah may want to know what’s up with the mysterious calls, and if their relationship gets closer, Tessa may need to come clean with Mariah about what’s really going on.

Do you think that Mariah and Tessa will become a full-fledged couple? And will Mariah find out what Tessa’s hiding? Stick with the CBS soap and don’t forget to check CDL often for the latest Young and the Restless spoilers, updates, and news.