The Young and the Restless Spoilers: Cane and Devon Feud – Lily’s Future In Jeopardy 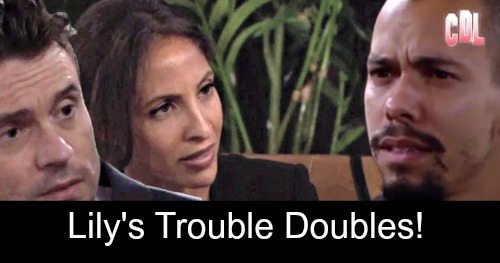 The Young and the Restless spoilers tease that Cane (Daniel Goddard) will not allow Devon (Bryton James) to go unpunished now that Lily (Christel Khalil) felt compelled to turn herself into the authorities and face potentially life-altering criminal charges.

Devon has labeled his thirst for revenge as a quest for justice. Yes, the self-righteous often lie to themselves.

Lily is not solely responsible for the deaths of Hilary (Mishael Morgan) and Hevon’s unborn child. Instead, Lily and Hilary share equal responsibility for the car accident that resulted in Morgan’s character no longer being on the show.

Savvy Y&R fans, which include all readers of this comprehensive site, know that Morgan voluntarily chose to leave the cast earlier this summer. She is pregnant with her second child and is set to deliver toward the end of this year. So, Hilary’s write-out was prompted by this off-camera decision.

Soap fans are right to be saddened by the death of the two characters, including the one that was never cast, being the baby, as this storyline is well-written and has been played magnificently. The same observers are also right to be disappointed that Morgan is no longer on Y&R, as her performances were consistently outstanding during a wonderful five-year run.

At the same time Morgan and her expanding family are wished well. Real life always is more important than a soap job for any daytime actor, or behind-the-scenes team member.

As for Cane, he’s torqued at his brother-in-law. Devon is blinded by rage and ravaged by grief. He can’t see anything other than destruction of his family, while at the same time wanting to lash out at his sister who, ironically, was always trying to protect him from Hilary’s erratic, self-destructive behavior.

Lily felt fully guilty and was willing to do anything to help alleviate her brother’s pain. But even the incriminating statement she made to Paul (Doug Davidson) didn’t slow Devon’s spin-out.

James’ character recently said that the only form of justice would be if Lily was dead instead of Hilary. That stunning statement revealed an element within Devon that Lily and Neil (Kristoff St. John) hadn’t seen before.

While often enraged by Hilary’s actions and words, Devon never turned his wrath against his sister in this manner. And that included those many times when he was defending his wife against various Winters’ and Ashby family attacks.

The near fist-fight that Nate (Brooks Darnell) thankfully broke up was the latest escalation in this bitter battle. With the most horrid events having occurred, meaning the deaths of Hilary and her unborn baby, resultant emotional fallout was expected to be epic and it surely is.

Y&R is presenting one of its more pained storylines in recent years. All involved actors are demonstrating their strong chops, in what is a deeply engaging and rapidly evolving arc. CDL is a leading source for everything linked to The Young and the Restless. Check back regularly for Y&R spoilers and news!