The Young and the Restless Spoilers: Cane and Lily Inch Closer – Lane’s Revival Possible, But Not Certain

BY Sean O'Brien on January 5, 2018 | Comments: one comment
Related : Soap Opera, Spoiler, Television, The Young and the Restless 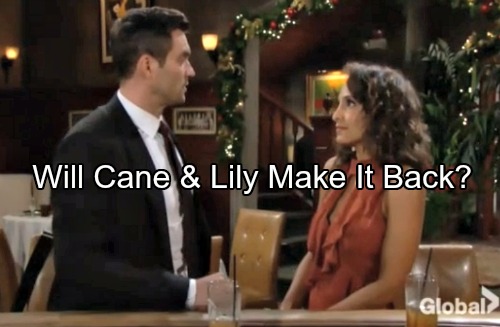 The Young and the Restless spoilers tease that Cane (Daniel Goddard) and Lily (Christel Khalil) are inching closer to each other, though they don’t realize it. Yes, Lane’s restoration is more possible than ever, though still uncertain. Both sides will need to be open with their feelings in order for this hoped-for reunion to happen.

Jill (Jess Walton) had a good idea. She orchestrated a one-on-one get-together between Cane and Lily at the Chancellor estate on New Year’s Eve. It didn’t result in what Jill, or Esther (Kate Linder) wanted, a ‘Lane’ reunion, but at least the couple spent time together on an important night. 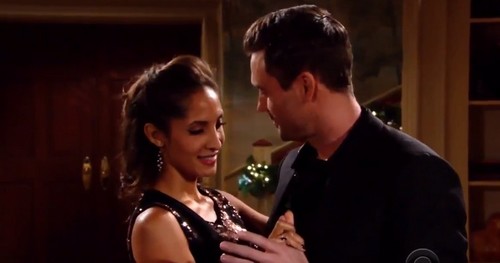 It’s true that Jill’s efforts to reunite Billy (Jason Thompson) and Vickie (Amelia Heinle) didn’t work out. They never reconnected romantically. Plus, Brash and Sassy fell apart, partially as a result of the battles that formerly married couple had. But also because Cane butted heads with Billy.

Intriguingly, Jill has now repositioned Cane and Billy at Chancellor Industries, which came as a shock to Mr. Ashby. J.T. (Thad Luckinbill) is the third player in that corporate game. Those three guys won’t be vying for any lady’s attention, unless one of them hires an appealing co-worker.

Separate from business, ‘Lane’s’ best chance at revival appears to rest with Sam. Juliet’s (Laur Allen) baby appeared to be the force that was going to pull Cane to Miss Helton. However, the death of Allen’s character permanently changed that dynamic.

Currently, Lily and Cane believe that the other person has moved on. Those false perceptions continue to be fueled by intervening factors, the latest of which was J.T.’s arrival at the mansion.

Lily responded to Cane’s missed call by bee-lining to Cane’s temporary home. But Mr. Hellstrom’s arrival mucked up another opportunity for ‘Lane’ to bond.

As with any couple, if either party, or both want a reunion it becomes more likely to happen. The trepidation that Lily and Cane feel is understandable based upon all that’s happened to-date.

Disturbingly, it’s possible that divorce proceedings will be revived if at least one half of this still-married couple doesn’t take the initiative. That outcome will seem fated, even though that won’t actually be the case. Here’s hoping that a turn of the calendar inspires fresh thoughts and honesty.

Jill encouraged Cane and Lily to be open with each other. Possibly, those wise words will be embraced by two people who still love each other. Hopefully, deep-seeded feelings will provoke progress toward full reconciliation in 2018.