The Young and the Restless Spoilers: Cane Fears For Family As Lily Sentenced – Devon Hides Behind Hilary’s Shadow

BY Sean O'Brien on September 3, 2018 | Comments: one comment
Related : Soap Opera, Spoiler, Television, The Young and the Restless 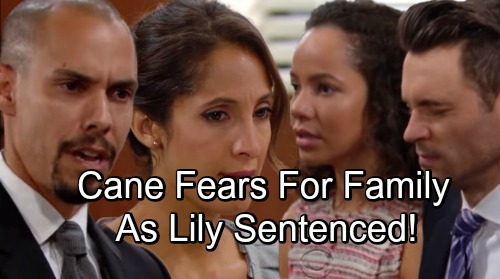 The Young and the Restless spoilers tease that Cane’s (Daniel Goddard) worst fear is almost certain to be realized. He wanted to protect his wife from what’s about to happen. Yes, the sentencing hearing regarding the tragic accident that took Hilary’s (Mishael Morgan) life and that of her unborn child is about to happen.

Charlie (Noah Alexander Gerry) told his dad that Lily (Christel Khalil) went through the red light. Later, Shauna (Camryn Hamm), an eye-witness to the accident, said the same. Her recall was intentionally projected at Hilary’s post-funeral reception at Hevon’s penthouse. The intent was to expose Lily, as Shauna believed she was a hypocrite.

Cane didn’t take kindly to Shauna’s personal opinion, as she was the one who lured Charlie to Hevon’s place while no one was home. The high schoolers were later caught, by Lily, though they hadn’t gone as far as expected in an upstairs room.

Ironically, Hilary cleared Lily for what happened. The former enemies had a good talk just prior to Hilary’s end on this earth. That literal death bed conversation in Genoa City Memorial Hospital did come prior to Lily learning that she unknowingly ran the light that led to the accident that took Hilary’s life.

If Hilary survived she likely would hold a similar, or far more aggressive take on Lily’s guilt. Currently, Devon (Bryton James) believes that he’s avenging the deaths of his wife and unborn child.

Cane understands his brother-in-law’s grief, but not Devon’s choice to punish Lily for the losses that occurred. He, his children, and Neil (Kristoff St. John) will suffer mightily if Lily is remanded to prison for many years.

Hilary’s shadow was long. Devon hid behind it for years. Excusing her behavior and serving as an enabler, except during a handful of months following Hevon’s divorce.

With Hilary gone, Devon has no center. He seemed to have finally arrived at a place where Hevon was on somewhat equal footing. Whether that would have stayed true after the baby was born, or for however long thereafter will be forever unknown. But Devon’s hard stance, post Hevon Part I, did serve to change Hilary’s approach to her husband.

Devon lost his wife and he wants Cane to lose his. In Devon’s mind the loss will be infinitely less because Cane and the twins can still visit with Lily, while she’s serving her assumed term.

It’s not lost on anyone that Hilary’s disruptive presence persists despite her death. Having stirred trouble for the Winters’ and Ashby families so often during her life, it’s not surprising that her champion, Devon, has assumed Hilary’s longtime demeanor.