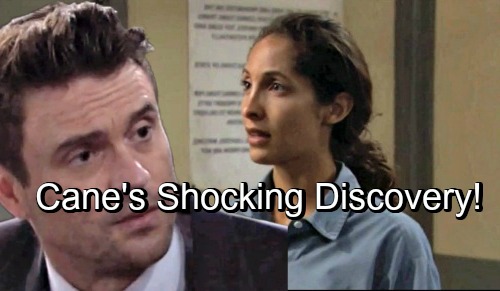 The Young and the Restless (Y&R) spoilers tease that Cane (Daniel Goddard) will head back to see Lily (Christel Khalil) later this week, October 8-12. He’s determined to make Lily feel loved and supported as she goes through this ordeal. Lily’s still got a long road ahead of her, but at least she knows her family’s on her side.

Charlie (Noah Alexander Gerry) and Mattie (Lexie Stevenson) have struggled since Lily landed behind bars, but Cane’s handling the situation as best as he can. He misses Lily terribly and it’s tough managing the household without her. Nevertheless, Cane knows his problems are insignificant compared to what Lily’s going through. That’s why he’ll keep up the visits and show Lily he cares.

Unfortunately, a shocker’s waiting during Cane’s next trip. The Young and the Restless spoilers say we’ll see a major personality overhaul for Lily. She’ll toughen up and become a completely different person from Cane’s perspective. Y&R fans can expect Cane to be thrown by the changes he sees. He’ll call Lily out on her hardened persona and wonder what’s become of his wife.

When confronted, Lily will blast Cane for his complaints. She’ll insist that he has no idea what it’s like in there. Lily will argue that she’s just trying to survive this nightmare and get through each day. If she has to adopt a bad attitude and seem a bit more dangerous, then so be it. It’s better than the alternative.

Lily doesn’t want to seem like the spoiled little princess who can’t take care of herself. That’d be a surefire way to get beaten to a pulp or even killed. Lily will snap at Cane for being insensitive and question if he’s truly in her corner. She’ll think he has a funny way of showing if he is.

The Young and the Restless spoilers say Cane will argue with Lily, but he’ll ultimately realize what she’s up against. He’ll soften and offer plenty of reassurance to his stressed spouse. Cane will determine that Lily needs comfort right now, not criticism.

Once Cane consoles Lily, she should calm down and share a tender moment with her hubby. Of course, this may be the start of issues for their marriage. Can their relationship survive this time apart? Prison could certainly change Lily, so there’s no guarantee “Lane” will be the same when she gets out.

Some hot drama’s coming up on the CBS soap. We’ll give you updates as other news emerges. Stay tuned to Y&R and don’t forget to check CDL often for the latest Young and the Restless spoilers, updates and news.