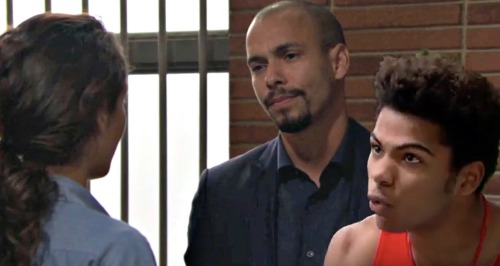 The Young and the Restless spoilers tease that Lily’s (Christel Khalil) prison sentence will continue to negatively impact the Ashby family. Cane (Daniel Goddard) is naturally worried about his wife’s fate in prison, and Lily is putting on a brave face for her kids. She’s told the twins that things are rosy on the inside and that she’s getting along just fine.

But Lily hasn’t been honest with the kids. She’s actually having a difficult time adjusting to prison life, and she’s still ridden with guilt over the accident that took Hilary’s (Mishael Morgan) life. To make matters worse, the other inmates seem to think that Lily’s a spoiled rich girl, which puts her at risk.

As for the twins, they have very different takes on what their mom’s going through in prison. Mattie (Lexi Stevenson) seems to have a rosier impression of what’s going on behind the scenes at the prison than Charlie (Noah Alexander Gerry). Charlie outright disbelieves his mom’s version of how things are going, and he’s very worried about her safety.

While Mattie copes by researching things such as how to add more money to her mom’s commissary account, Charlie tends to bear the weight of the world on his shoulders. But he doesn’t know how he can help or what he should be doing. As a teenaged son, he’s naturally protective of his mom, but now he feels helpless to do anything for her.

And just like a teenager with deep problems, Charlie’s been acting out by skipping school. Y&R spoilers say that he’ll soon return to school after making a deal with Devon (Bryton James), but he may start acting out in other ways.

Unfortunately, if Charlie doesn’t get some help on how to handle his pain resulting from his mom being in prison, he may start to spiral out of control. Hopefully, Cane and/or Devon will step in and help this young man to cope. Once Charlie is back in school, he could face teasing over his mom being in prison, and that could lead to fights or even expulsion.

Do you think Charlie will get the help he needs to cope? Stay tuned to the CBS soap and don’t forget to check CDL often for the latest Young and the Restless spoilers, updates, and news.