The Young and the Restless Spoilers: Chloe’s Back – Knocked Sharon Out With Coffee Pot in Vicious Attack? 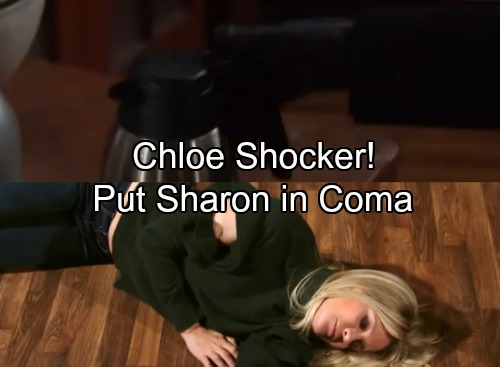 The Young and the Restless (Y&R) spoilers tease that it will be a complete shocker who clocked Sharon (Sharon Case) over the head with a coffee pot, sending her to the hospital to fight for her life. Most fans will assume that the person who hit Sharon will be Chelsea (Melissa Claire Egan), but it’s clear that TPTB is going a completely different direction.

At the end of Wednesday’s show, February 21, Sharon calls Nick (Joshua Morrow) with the intent of confessing Christian isn’t his son. Before she could utter the words, someone with black gloves hits her over the head with a coffee pot, and she tumbles to the floor.

The Young and the Restless spoilers state that Chelsea couldn’t have attacked Sharon, as she was sitting next to Nick at the time. So, if Chelsea didn’t do it, who could be the attacker?

Some Y&R fans pointed out that Victor could have attacked Sharon. It’s true that he could be the one who hit Sharon, but not likely. The gloved hand on the coffee pot looked like a woman’s hand. It’s also unlikely that Victor would attack Faith’s (Alyvia Alyn Lind) mother.

The black leather glove hand looks like one we’ve seen before. In 2016, Adam Newman (Justin Hartley) was “killed” by Chloe Mitchell (Elizabeth Hendrickson). After the explosion, a black leather glovd hand put Adam’s ring in a drawer. It was implied the leather gloves belonged to Chloe. Is it possible that Chloe could have returned to attack Sharon to keep Kevin (Greg Rikaart) safe?

It isn’t a huge jump to assume that Chloe may feel the need to protect Kevin. He put himself on the line to give Phyllis (Gina Tognoni) and Sharon access to the police station computer. And, the truth is that’s only one of Kevin’s illegal schemes in the past few months. Let’s not forget Kevin helped Nikki (Melody Thomas Scott) steal millions from Victor’s bank account.

Chloe may think that preventing Sharon from spilling Christian’s paternity will keep Kevin safe. However, this thing will be coming out soon and there’s nothing Chloe, Kevin, Victor, or Chelsea can do about it. Who do you think attacked Sharon with the coffee pot?

Don’t forget to come back to CDL for more The Young and the Restless spoilers, news, and casting updates!