The Young and the Restless Spoilers: Comatose Nikki Fights to Survive – Noah and Victor Return During Family Crisis

BY Heather Hughes on December 15, 2018 | Comments: one comment
Related : Soap Opera, Spoiler, Television, The Young and the Restless 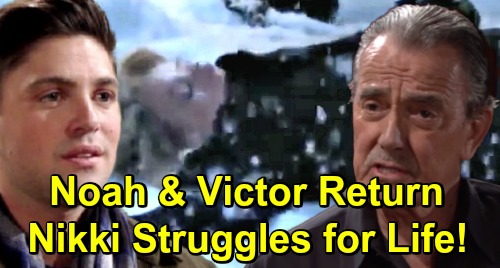 The Young and the Restless (Y&R) spoilers tease that someone will make a stunning discovery. After Nikki (Melody Thomas Scott) drinks too much and stumbles into the path of speeding Reed (Tristan Lake Leabu), she’ll face serious injuries. Since Reed won’t be aware that he ran over Nikki, he won’t stop to get his grandmother some help.

Some surprised Genoa City resident will come along and find Nikki bleeding on the side of the road. Once 911 is called, the paramedics will arrive to rush Nikki to the hospital. It’s clear that the situation will be quite dire. The Young and the Restless spoilers say Nick (Joshua Morrow) and Victoria (Amelia Heinle) will be devastated when they hear the shocker.

Victor (Eric Braeden) will still be MIA, but the Newmans will step up their efforts to reach him. Another crucial family member will be notified as well. Y&R fans can expect Noah (Robert Adamson) to get updates on his grandmother’s horrible ordeal. He’ll realize Nikki could use some extra support, so he’ll book a flight and fly in from London ASAP.

The Young and the Restless spoilers state that Nikki will end up in a coma, so a waiting game is ahead. Nikki’s doctors probably won’t have high hopes about her pulling through. Her diagnosis should be grim, but the Newmans won’t give up on her. They’ll count on a Christmas miracle and we all know they’ll get one. In fact, the Newmans will receive couple of them this year!

Victor will resurface just in time for Christmas Eve, so that’ll bring some relief. There have been concerns about Victor’s safety since so much chaos has been going on in Genoa City. His family will be glad to know he’s OK.

Victor’s return will give Nikki the strength she needs to survive, so that’ll bring another round of good news. The Newmans’ bad luck streak will finally turn around as we head into the new year. Of course, more unfortunate incidents are just around the corner. The J.T. (Thad Luckinbill) saga isn’t over, so Nikki will have to face additional drama after she awakens and recovers.