The Young and the Restless Spoilers: Comings and Goings – Robert Adamson Back as Noah – ‘Shick’ Family Drama Explodes 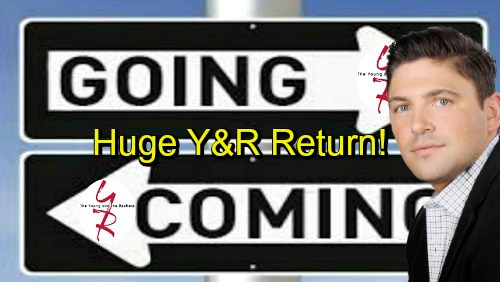 The Young and the Restless (Y&R) spoilers tease that there’s some comings and goings news to share. Nick (Joshua Morrow) and Sharon’s (Sharon Case) wedding will bring some family members we haven’t seen in a while. First, there’ll be a Faith (Alyvia Alyn Lind) sighting. She missed Sharon’s recent graduation, but she had to be on hand to watch her parents tie the knot.

Unfortunately, it looks like Faith won’t get the chance. Y&R fans know she was wary when Sharon and Nick announced their reunion. In the past, Faith would’ve been thrilled. However, she just didn’t have high hopes this time around.

Faith confided in her Mariah (Camryn Grimes), who suggested that sometimes love is worth the risk – even if it means getting hurt. Alas, Sharon’s indeed about to get hurt. The Young and the Restless spoilers say Mariah will blab about Nick and Phyllis’ (Gina Tognoni) one-night stand. She’ll hate devastating Sharon, but she’ll feel like her mom needs all the facts before her nuptials.

After Mariah gives Sharon some space, we’ll see wedding chaos. Sharon will be a no-show at the ceremony, so Nick (Joshua Morrow) will be in full-blown panic mode. Of course, Sharon may end up arriving late. Perhaps she’ll arrive just in time to call the whole thing off.

Other Young and the Restless spoilers say Noah (Robert Adamson) will return this week. Y&R fans had been wondering if he might make an appearance. A new pic shows Noah looking glum next to Mariah. Since Noah’s bowtie is loosened, it seems it may be after the wedding blowup. At least Sharon will have all her kids there to rally around her.

Noah needed to make a comeback anyway. Now that Mariah and Tessa (Cait Fairbanks) are a couple, it should be fun to hear him weigh in. Since Noah’s got a good heart, we’re betting he’ll offer his blessing. Nick and Sharon’s disaster of a relationship should be a far bigger concern!

That’s it for comings and goings. We’ll give you updates as other Y&R news comes in. Stay tuned to the CBS soap and don’t forget to check CDL often for the latest Young and the Restless spoilers, updates and news.