BY Kinsley Goldman on May 20, 2018 | Comments: Leave Comments
Related : Soap Opera, Spoiler, Television, The Young and the Restless 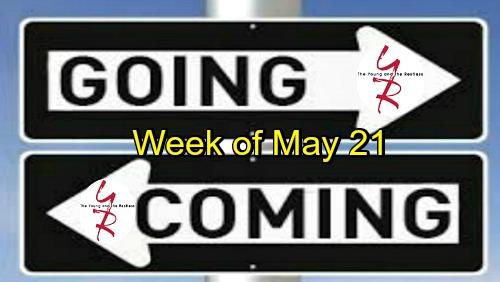 The Young and the Restless (Y&R) spoilers reveal that we’ve got some comings and goings news to pass along. For starters, let’s discuss some departures. Nikki’s (Melody Thomas Scott) business associates have served their purpose. Jane (Laura James) and Lawrence (Zach Dulin) were just around to spark an official reunion for “Shick,” so their brief appearances are done.

Now Sharon (Sharon Case) and Nick (Joshua Morrow) can focus on rebuilding their relationship. They’ll do their best to avoid their usual problems, but that’s obviously going to be difficult. Sharon is keeping a major secret and she’s been lying to Nick’s face about it. All the J.T. (Thad Luckinbill) drama’s sure to blow up eventually, but Sharon will enjoy her renewed romance for now.

Other Young and the Restless spoilers say Camryn Hamm will be back as Shauna this week, May 21-25. She’ll be on hand for a special event. Devon (Bryton James) will help Hilary out by putting on a GH Buzz prom. It’ll ease Shauna’s pain since her guy of choice asked someone else. This will also give Hilary something to talk about on the show, which will come in handy since a guest’s going to cancel.

This time Farah will help find a new bachelor pad. Kyle (Michael Mealor) may need one if Abby (Melissa Ordway) keeps at it. She’s determined to prove he had something to do with the altered interview. If Abby can’t achieve her goal, she just might take Kyle down another way. Regardless, Kyle may no longer be welcome in the Abbott home by then.