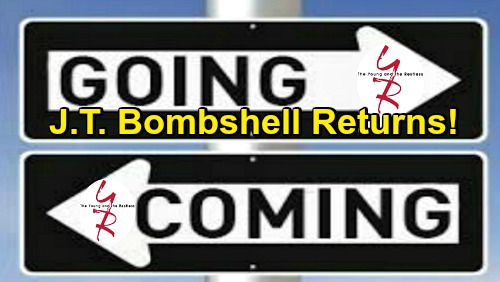 The Young and the Restless (Y&R) spoilers reveal that we’ve got some comings and goings news to pass along. For starters, let’s talk about some recent departures. After careful consideration and advice from Kyle (Michael Mealor), Summer (Hunter King) decided to accept Victor’s (Eric Braeden) offer. She’ll be mentored under her grandfather until she’s ready to take over the Newman office in Dubai.

Despite Nick (Joshua Morrow) and Phyllis’ (Gina Tognoni) best efforts, they just couldn’t keep Summer in Genoa City. She bid them farewell and left to catch her flight, so Summer’s gone for now. Will Summer return down the road? There’ll surely come a day when Summer will stir the pot again! For now, we’ve got Mia (Noemi Gonalez) and that’s more than enough as far as troublemaking goes.

Shauna (Camryn Hamm) also admitted she didn’t feel comfortable living with Devon (Bryton James) anymore. He’s hanging out with a rough crowd, so Shauna’s ready to go live with her parents again. On Monday, Shauna shares a difficult goodbye with Devon and leaves for Colorado. It’ll be a tough adjustment for Devon since taking care of Shauna was his last link to Hilary (Mishael Morgan).

We should also discuss some great returns. Fenmore “Fen” Baldwin appears on Monday, December 3, but he’ll be played by a new actor this time around. Zach Tinker is taking over the role, which was previously played by Max Ehrich. The Young and the Restless spoilers say Fen will confess that music is his real passion. His heart just isn’t in law school anymore, so he’s dropping out to pursue his dreams.

Y&R fans can expect another big return soon enough. Reed (Tristan Lake Leabu) will show up in Genoa City starting December 10, so here’s your reminder of the drama that’s brewing. The girls’ night gang will have to stay on guard.

Other Young and the Restless spoilers say Kelly Kruger (Mac) just taped new scenes, so the J.T. story should continue into the new year. This hot plot has been going on for a while now, but at least there have been some good bombshells along the way! Y&R has even more ahead, so stay tuned for more mayhem.

That’s it for comings and goings. We’ll give you updates as other Y&R details emerge. Stick with the CBS soap and don’t forget to check CDL often for the latest Young and the Restless spoilers, updates, and news.