The Young and the Restless Spoilers: Crime and Punishment In Genoa City – Nikki Faces Incarceration, Meets Lily In Prison? 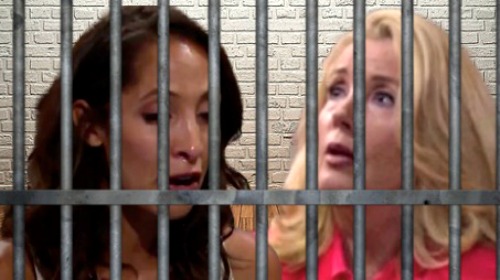 The Young and the Restless spoilers have fully documented the complex tale that has flowed endlessly since last spring. Now, as Rey (Jordi Vilasuso) seizes on found evidence, punishment must follow the crimes that were foolishly committed by the panicked and subsequently calculating coverup crew.

Nikki (Melody Thomas Scott) never intended to kill J.T. (Thad Luckinbill) when she went over to her daughter’s house earlier this year. Vickie (Amelia Heinle), like her mother, didn’t know that her then-recently severed fiance would be in the house.

As viewers recall, J.T. climbed on top of the garage and made his way in through an upstairs window. The shame of how far Mr. Hellstrom descended was seen on his pained face. His out of character aggression, which was written into the script for months leading up to Luckinbill’s final scene (as the alive J.T.), increased exponentially.

Nikki, Phyllis (Gina Tognoni), and Sharon (Sharon Case) heard loud voices after Vickie went upstairs. They followed and found J.T. within close physical proximity of the woman he once loved. Instead of having the three entered characters overpower J.T., Y&R wrote a fireplace poker into Nikki’s hand. She raised what became a weapon and hit the then-assailant on the head, which likely killed him.

The idea that J.T. was still alive seemed preposterous and still may be. It would be incredible if Y&R actually opts to resurrect this particular character, as the chance for a redemptive ending would then be possible. Instead it seems as though the created monster was killed many months ago and somehow had his body moved this fall.

Punishment will have to follow as soon as Rey links the coverup crew to J.T.’s unreported death and illegal burial. Seasoned audience members would surely reject any write-away of needed consequences at that plot point. This is daytime, so it therefore remains possible that devoted viewers might be asked to digest more than they can handle.

If a truly poor soul like Lily (Christel Khalil) is serving a one-year jail sentence, which is happening hours from home at Lakewood, then so too must Nikki be locked up. In all fairness, Vickie, Phyllis, and Sharon should also face some significant consequence, though Nikki might be the only person who gets time in prison since she is the murderer.

It’s not that Nikki wanted J.T. to die. She was honestly acting in the defense of her daughter. But not reporting what happened, digging a grave on property she owns at Chancellor Park, and dumping J.T.’s body were all wrong acts.

It is often the coverup that leads to trouble, as Rey seems destined to prove. When that happens, Nikki will have no legitimate legal defense and hopefully is written into scenes with Lily, which would at least make that storyline more useful.