The Young and the Restless Spoilers: Devon Acting Like Hilary At Her Worst – Needs Afterlife Intervention From Deceased Wife

BY Sean O'Brien on August 22, 2018 | Comments: one comment
Related : Soap Opera, Spoiler, Television, The Young and the Restless 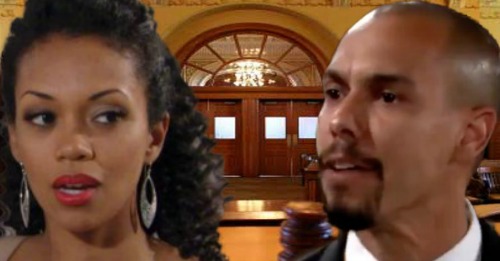 The Young and the Restless spoilers tease that yes, Hilary (Mishael Morgan) is in Heaven. All fans can believe as they wish about Devon’s (Bryton James) wife. But she surely suffered enough to make it through the pearly gates, right However, long before she likely ascended, Hilary’s bad behavior seems to have rubbed off on her husband.

Devon has been treating Lily (Christel Khalil) like she is the worst criminal in the history of Genoa City. Apparently he isn’t familiar with Ian Ward (Ray Wise), Patty (Stacy Haiduk), Victor (Eric Braeden), or others. In point of fact, Lily didn’t willfully break any law and never intended Hilary to die.

Lily’s date with legal prosecution may be approaching, but her brother has already been applying moral persecution. While it’s fully understandable that Devon would be grieving the loss of his unborn child, he has no right to blame Lily for that tragedy.

Topping that is his full-on assault of Lily for Hilary’s subsequent death, when he knows that his wife was distracting his sister as she was driving through the GC streets on that recent fateful summer day.

Neil (Kristoff St. John) continues to tell Lily that Devon is simply grieving. The head of the Winters’ family is hopeful that the stages of grief are playing out and that Devon will come to his senses soon, or at least in time.

James and Khalil’s on-screen interplay has been fully believable. Both actors are earning kudos for their consistently passionate, emotional performances.

Along with the above, Devon’s recent recant to Mariah (Camryn Grimes) offers a potential glimpse into his wounded heart. Speaking about Hilary driving him crazy on various occasions might, again might, be an indication that he’ll eventually link Hilary’s ability to make people nuts via her verbal rants with what took place inside Lily’s car.

Hilary surely can’t be pleased with Devon at the moment. If she were alive, or is to be seen in an otherworldly scene that could have been recorded in advance of Morgan voluntarily exiting the cast, Hilary would no doubt tell Devon to knock it off.

In a touching scene that, in retrospect, has also proven telegraphic, Lily and Hilary settled their differences just prior to Morgan’s character dying. Their peace plan included Hilary’s absolving Lily for what happened. Though Devon may literally need to hear that from his wife via a dream, or angelic vision.

As for the Heaven reference, okay, it’s possible that Hilary is in Purgatory. Considering her mostly unseen charitable efforts and how she embraced Shauna (Camryn Hamm), this character can’t possibly be in a hot place. With that in mind, Devon would surely benefit from the after-life intervention that’s being suggested.