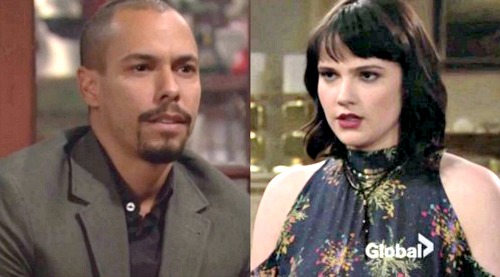 The Young and the Restless (Y&R) spoilers tease that Devon (Bryton James) will stumble across some shocking info. He’ll uncover a secret that could wreck lives and turn things upside down in Genoa City. There’s no final confirmation yet on what Devon will learn, but Y&R buzz says that Tessa (Cait Fairbanks) will be involved.

Y&R fans have never really heard the whole story when it comes to Tessa. She alluded to facts about her shady past that she would never reveal. Of course, that just made everyone more curious. The Young and the Restless can’t leave viewers hanging! The show needs to spill the truth and this is the perfect opportunity.

Devon will find out this secret on Friday, February 16, but the aftermath should explode next week, February 19-23. The Young and the Restless spoilers have been hinting at February sweeps drama for Devon. He’s going to pay the price for his kindness and generosity.

Devon allowed Tessa to keep working for him as an assistant, but he’ll soon regret giving her that shot. There might be some crimes that Tessa covered up and got away with. If not, there’ll surely be something almost as terrible that she never explained.

Even though Tessa’s been dropped from the label, she’s still associated with Hamilton-Winters. If this scandal spreads, Devon’s business could take a huge hit. They do plenty of PR work, so how’s it going to look if they can’t protect their own image?

Next week, Mariah (Camryn Grimes) will get some crushing news. She’ll be absolutely devastated by the updates that come her way. It seems like a no-brainer that Tessa will be fired. What happens after that? Will Tessa be thrown behind bars over something in her past? Will she plan to leave town instead? Those are some good possibilities.

However, we should keep open minds. There are many secrets circulating in Genoa City right now. Devon could discover something else instead, but that won’t change Tessa’s fate. The Young and the Restless spoilers say Tessa’s struggles are far from over!

Is Y&R setting up Tessa’s exit or are they just trying to make her suffer for what she did to Mariah? Can this character be salvaged? We’ll keep you posted as other details emerge. Stay tuned to the CBS soap and don’t forget to check CDL often for the latest Young and the Restless spoilers, updates and news.