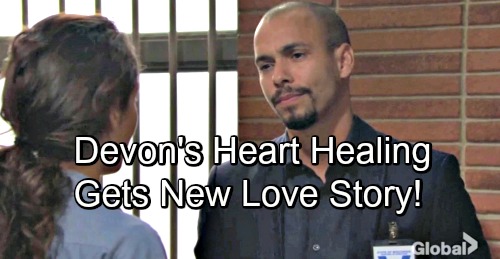 The Young and the Restless (Y&R) spoilers tease that Devon’s (Bryton James) breaking free from the tight grip grief’s had on him. He’ll always carry the pain of losing Hilary (Mishael Morgan) and their unborn child, but he can’t wallow in sorrow forever. Devon has to find a way to cope with his sorrow and move on.

Devon’s been taking some huge steps toward that lately. He started by changing his tune in court and pushing for Lily’s (Christel Khalil) lighter sentence. Although Lily still got 12 months behind bars, it could’ve been far worse. A year is better than two decades, so Devon definitely helped Lily out. It showed that he was moving in the right direction.

Thursday’s episode brings an even bigger breakthrough. Devon manages to let go of his animosity and accept that this was a tragic accident. Lily isn’t a cold-blooded murderer, so she deserves sympathy, too. Devon finally realizes that, so they’re making amends and going forward as a family again.

What does all this mean for Devon’s future? The Young and the Restless is allowing Devon to work through his emotions. That can only lead to a positive outcome. Again, nothing can erase Hilary’s memory or fill that void in Devon’s heart. He’ll just have to live with the fact that Hilary’s gone and try to find a new normal.

As part of that new normal, Devon will eventually reenter the dating pool. Y&R fans hope the show takes their time with this since we’re still grieving the loss as well. Nevertheless, Devon certainly doesn’t have to stay single forever. That’s especially true when new love could help him live and thrive again.

Soaps tend to move things along pretty quickly, so they could start laying the groundwork for another love story soon. The Young and the Restless spoilers say Alice Hunter will debut as Kerry Jones this fall. She’ll show up on screen right around the end of October.

Word has it Kerry could become Devon’s next love interest, but Y&R will undoubtedly let this bloom slowly. Alice probably won’t even be in Devon’s orbit as first. She’ll go to work for Jabot and ultimately get caught in Newman drama, but crossing paths with Devon should come later.

Are you rooting for Devon to find love again? How soon is too soon to move on? Can anything top “Hevon” magic? We’ll give you updates as other Y&R news comes in. Stick with the CBS soap and don’t forget to check CDL often for the latest Young and the Restless spoilers, updates and news.