The Young and the Restless Spoilers: Did Jack Sleep With His Sisters? – Neil Fenmore Paternity Horror Story 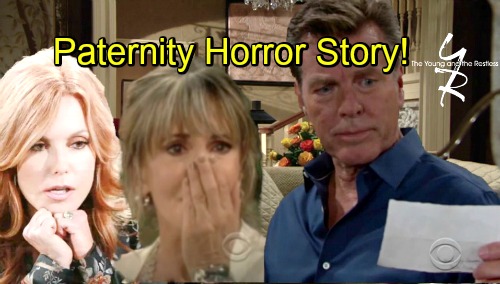 The Young and the Restless spoilers tease that Jack (Peter Bergman) might be a Fenmore. If true, that would mean he previously slept with both of his sisters! However, it appears likely that Y&R is actually using Jack’s paternity mystery to take viewers on a ride through its own history, which includes a variety of famous actors who’ve appeared in its deep cast.

Would Y&R actually create a storyline where one character unknowingly had relations with not one, but two siblings? That would seem unlikely, even in today’s modern daytime world. But this is the next tease being presented to the audience following Phillip Chancellor II’s (Donnelly Rhodes) recent rule-out as Jack’s biological father.

Rhodes, who passed away earlier this year, was an accomplished television star. Prior to Y&R he appeared in Bonanza, Mister Ed, The Alfred Hitchcock Hour, and Mission: Impossible, among others. After Y&R, he was a cast member of Soap, appeared in Wonder Woman, the original Magnum P.I., Hill Street Blues, The X-Files, and was a cast member of Davinci’s Inquest and the second incarnation of Battlestar Galactica. Among many other shows, he also appeared in Supernatural and The Flash.

Lauren (Tracey Bregman) was shocked when she saw the photo Jack believes contains the answer to his paternity mystery. A variety of men are shown transfixed by Dina (Marla Adams) within that black and white country club shot. The aforementioned Phillip is seen, along with Neil Fenmore (Jim Storm), who was her dad.

Storm was famous for his portrayal of Gerard on Dark Shadows. He appeared in various other nighttime shows and was part of soap casts including The Secret Storm, One Life to Live, The Doctors, Capitol, and the soap that replaced it, The Bold and the Beautiful, where he played Bill Spencer, Senior.

Devoted viewers know that soaps revise history in order to created new plot paths. Such was the case when Lauren and Jill (Jess Walton) became sisters through the discovery that Bill Foster (Charles H. Gray), not Neil, was Jill’s biological father. Lauren and Jill are Jack’s blood sisters if Neil is his true dad.

The actor who portrayed Bill Foster appeared on Y&R during its early days in the 1970’s. Gray had a prolific run during television’s golden age. He was part of many famous show including Highway Patrol, Gunsmoke and Rawhide.

Historical records have been offered regarding Rhodes, Storm, and Gray. At the same time, Jack is currently delving into the backstories of the men Dina was purportedly involved with during her marriage to John (Jerry Douglas, who is an accomplished television actor in his own right).

Jack’s current plot feels like a tease. Neil can’t realistically be confirmed as the sire of Bergman’s legacy character, as the unseemly nature of Jack’s romantic interactions with Lauren and Jill could never be casually explained away. However, important elements within Y&R’s history have been honored via the arc that Jack has been written into. That seems to be a key, underlying element with this entire paternity storyline.

Seasoned fans are allowed to revisit yesterday, while newer viewers are educated about the history of this soap and those who were part of its ensemble. Regardless of whoever is eventually tagged (or reaffirmed) as Jack’s dad, Y&R’s screen time investment is worth it.