The Young and the Restless Spoilers: Doug Davidson Reveals the Truth About Being Fired From Y&R

BY Heather Hughes on September 12, 2018 | Comments: one comment
Related : Soap Opera, Spoiler, Television, The Young and the Restless 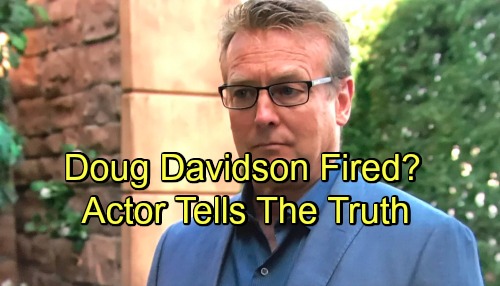 The Young and the Restless (Y&R) spoilers reveal that Doug Davidson (Paul) is speaking out again. Y&R fans were stunned when Davidson shared some disappointing updates on Twitter. He noted that the show had nothing in the works for him and indicated that although he was officially on recurring status he’d seemingly been let go.

Viewers naturally started voicing their support, but they were also left wondering about all the facts. Did The Young and the Restless really fire Davidson? What’s been going on behind the scenes? Fortunately, Davidson decided to clear a few things up in interviews appearing on his Twitter account. He wanted to set the record straight about his tweets and what they meant.

After the fans’ heartbreaking reaction was mentioned, Davidson was asked what actually happened. “I’m heartbroken too. I really wasn’t making a formal announcement. I had many viewers asking me what was going on. So I told them.” Davidson went on to provide some contract details. He’s disheartened by the changes in his status and the negative outlook for the future.

“My contract was not renewed in January and I have been recurring since then,” Davidson admitted to Soap Opera News. “But now pretty much nothing. I have 2 shows that haven’t aired but beyond that I know nada.” You’d think Y&R would have something more in store for Paul since Detective Rey Rosales (Jordi Vilasuso) is in town and getting his hands dirty. It’d make sense to have them work on cases together.

There’s bound to be some cover-up crew fallout at some point, too. Paul should really be around for that, especially since he’s been suspicious of Victoria (Amelia Heinle), Nikki (Melody Thomas Scott), Sharon (Sharon Case) and Phyllis (Gina Tognoni) all along. It’s possible that he will be, but Davidson is certainly pessimistic about it.

Nevertheless, Davidson doesn’t want fans to think he’s turning against Y&R and its history. Despite his current frustration, he’s still got a lot of love in his heart. Davidson wanted to acknowledge how thankful he is for The Young and the Restless’ creators, William J. Bell and Lee Phillip Bell. “I am eternally grateful to the Bells and the show,” Davidson said.