BY hellodrdavis on October 2, 2018 | Comments: one comment
Related : Soap Opera, Spoiler, Television, The Young and the Restless 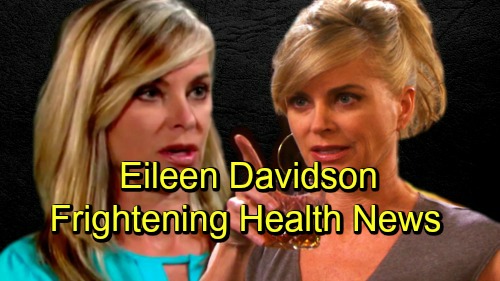 The Young and the Restless spoilers has some frightening health news to report about a Y&R star. Eileen Davidson, who portrays Ashley Abbott on the CBS soap, recently shared some photos on her Instagram account of a terrible-looking spider bite she suffered.

In her first message, she showed a photo of the bite, which is on her upper arm. The area surrounding the bite is rather large and red. Her message reads: “Brown recluse got me! #creepy #spiderbite #someonesleepinginmybed” Eileen’s referring to the Brown Recluse spider, which is found in parts of California (among other places) and has venom that can destroy cells in living tissue.

In response to her message, Eileen received an outpouring of sympathy and well-wishes, and many of her followers recounted similar experiences with spider bites. Some even urged her to seek medical attention, as the bites can be quite serious.

Stephen Nichols, who portrayed Steve Johnson on Days of Our Lives, even responded to Eileen’s post. His message reads: “Take care of that, Eileen! I got a bad #brownrecluse bite on #Days set years ago and unawares, got on a red eye. By the time we landed, my hand was twice as big and rings were forming!”

Later, Eileen responded in the comments section, saying “I’m so sorry. It probably wasn’t a Brown Recluse. I believed the internet when I looked at photos. At least I’m hoping so.” So, it seems the type of spider that Eileen came into contact with will remain a mystery.

Eileen then posted a follow-up photo and message. The photo showed a much larger red area on her arm, and her message reads: “So my spider bite has become infected. I’m on two antibiotics, I’ve had an injection of antibiotics and a tetanus shot. Two topical ointments, too. What???!!!”

So, fans shouldn’t be worried, as it seems that Eileen has received medical attention for her bite. Our thoughts and well-wishes are with Eileen as she recovers. Stay tuned to the CBS soap and don’t forget to check CDL often for the latest Young and the Restless spoilers, updates, and news.</p

So my spider bite has become infected. I’m on two antibiotics, I’ve had an injection of antibiotics and a tetanus shot. Two topical ointments too. What???!!!

A post shared by Eileen Davidson (@eileendavidsonofficial) on Oct 2, 2018 at 7:01am PDT