BY Marcy Cohen on October 12, 2018 | Comments: one comment
Related : Soap Opera, Spoiler, Television, The Young and the Restless 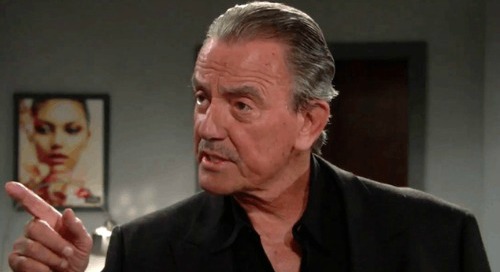 The Young and the Restless (Y&R) spoilers reveal that Eric Braeden (Victor) is voicing opinion on social media again. Twitter has become a bit of a war zone for fans and even a few disgruntled cast members. The state of Y&R has led to plenty of angry tweets about current storylines, contract disputes, actor departures and more.

Braeden has spoken out about his disappointment before. He also tends to retweet fans who share his same point of view. A recent one indicates some lingering displeasure with the writing on The Young and the Restless. The exchange started with one fan raging over Ashley’s (Eileen Davidson) paternity test tampering. She paid Andrew (Coby Ryan McLaughlin) to do her dirty work for her.

This Y&R watcher insisted it was completely out of character for Ashley. He argued that Ashley would never do this to Jack (Peter Bergman), especially after she went through the pain of learning she wasn’t an Abbott herself. Would she really inflict that same pain on Jack for any reason? Even power or revenge?

Another fan replied and tagged Braeden in the conversation. She said, “…I think @malyoung #YR wrote what he pleased and did not care how fans felt about the beloved Abbott’s, as he does not care about beloved Newman’s.” That comment must’ve caught Braeden’s eye since he hit the retweet button. That’s a clear statement against Y&R’s head writer and executive producer, Mal Young.

Braeden obviously isn’t afraid to speak his mind on social media or anywhere else. What are they going to do? Fire the great Victor Newman? At Braeden’s age, it wouldn’t be a big deal for him. He’s had a long, successful career at The Young and the Restless. Braeden has no plans to leave the show, but the point is he can do whatever he wants. He might as well pipe up and convey some frustration for fans!

On a lighter note, Braeden has some good things to say about his costars. He praised several Young and the Restless cast members in a tweet of his own. “Great scenes today between Daniel Goddard and CHRYSTAL KHALIL! And EILEEN was so damned good and real in her scenes with Peter Bergman and son!” Savvy fans will notice the names all in caps belong to those actors who were taken off contract or are leaving the show – another jab at Mal Young?

Perhaps Braeden’s trying to balance it out with some positivity where he can. He’s actually getting in a fan mindset here. Most viewers out there have no problem with the performance quality on Y&R. The show has a fantastic cast, so they always elevate what they’re given. Even when the stories aren’t what we might like, the actors manage to knock it out of the park.

Great scenes today between Daniel Goddard andCHRYSTAL KHALIL! And EILEEN was so damned good and real in her scenes with Peter Bergman and son!

I feel terrible, everything you said should be the case, however I think @malyoung #YR wrote what he pleased and did not car how fans felt about the beloved Abbott’s, as he does not care about beloved Newman’s. @EBraeden